A family grew by one in Tarrant County through an adoption you don't hear about very often.

FORT WORTH, Texas - A family grew by one in Tarrant County through an adoption you don't hear about very often.

A large group filed into the 233th District Court in Tarrant County on Friday where Judge Kenneth Newell presides over family matters. But this adoption was different.

Joel and Jeanette Willis are adopting Semico "Semi" Parsons, who is now an adult.

"We met at All Church Home," Jeanette recalled. "Do I need to say the year?"

Semi, as they call her, was a teenager staying in the home. But the Willis family couldn't adopt her because her biological mother’s rights were not terminated. 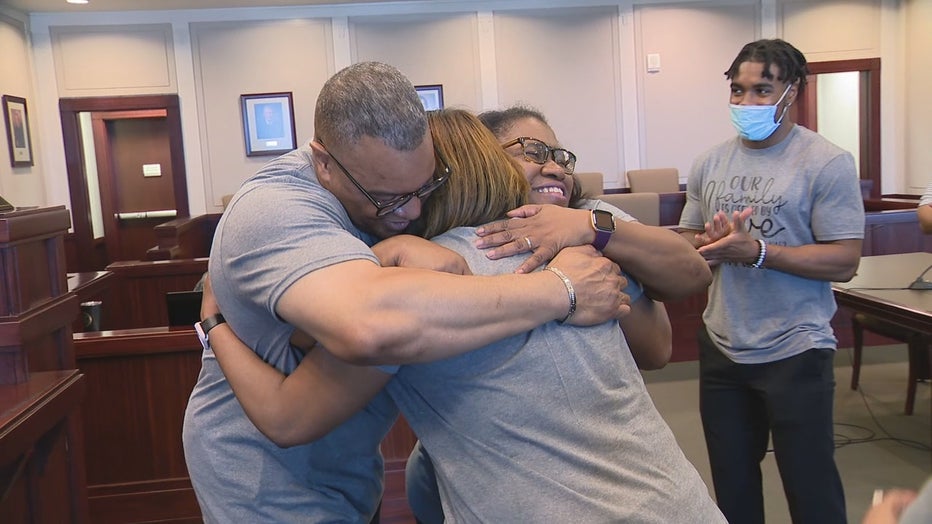 They told Judge Newell how they were always part of Semi's life. Emotions teemed in the crowded courtroom.

"She became that child that we would pick up when she was in distress or take to family functions with us," Jeanette said. "Traveled to Louisiana with us to family reunions. She just became part of our family."

Semico served in the U.S. Navy, managed to get a master’s degree along the way and is a mother to her own 10-year-old daughter. And the Friday before Father’s Day, she legally got what she's had by bond all along: a mother and a father.

"And so for 26 years, she's always called us mom and dad," Joel said. "And so today the timing is right, and today it becomes official. We are officially to be her mom and dad."

The adoption came with approval from the Willis' other children and Semico's daughter.

"It is the courts privilege to grant the adoption that you, Semico Zamika Parsons, are the daughter of Joel Stephen Willis and Jeanette McCrea Willis," Judge Newell proclaimed.

"Today what went through my heart was 27 years or more of wanting to have a forever family, a forever home," Semico said. "And I couldn’t think of a better day than today. I’m just I’m overwhelmed."

Joel and Jeanette now have one son and three adopted daughters. Semico is the only adult adoption they've carried out. They also get a granddaughter: Semico's 10-year-old.

It all serves as a heartwarming reminder that family may not be by blood but is always by love.