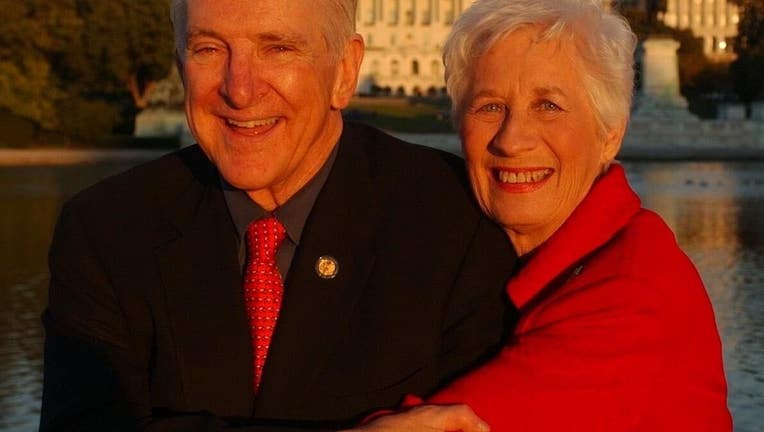 PLANO, Texas - Former Texas Rep. Sam Johnson, a military pilot who spent years as a prisoner of war in Vietnam before serving more than two decades in Congress, died Wednesday at age 89.

The conservative Republican, who lived in the northern Dallas suburb of Plano, died at a Plano hospital of natural causes unrelated to the coronavirus outbreak, said his former spokesman, Ray Sullivan.

Johnson flew nearly 100 combat missions in Korea and Vietnam. He was flying a bombing mission in 1966 when he was shot down and wounded. He was imprisoned in the infamous “Hanoi Hilton” for nearly seven years, mostly in solitary confinement. He retired from the Air Force as a colonel in 1979, after a 29-year career.

The ardent conservative and anti-communist was elected to Congress in 1991 after six years in the Texas House of Representatives. He vowed to stay a maximum of 12 years, though he served more than double that.

Johnson had been a POW with U.S. Sen. John McCain, and although they clashed in Congress, Johnson defended McCain in 2015, when then-presidential candidate Donald Trump suggested he wasn’t a hero because he’d been captured. Johnson announced in January 2017 that he would retire at the end of his term. When Johnson stepped down in 2019, at age 88, he was the oldest member of the U.S. House.

“Scripture tells us ‘There is a time for everything, and a season for every activity under heaven,’” Johnson wrote in a January 2017 letter to constituents, telling them he would retire at the end of his term. “For me, the Lord has made clear that the season of my life in Congress is coming to an end.”

Another former Texas congressman, Ralph Hall, was the oldest-ever member of the U.S. House when he left office at age 91 in 2014. Hall, a Republican and World War II pilot, was 95 when he died in March 2019.

Samuel Robert Johnson was born on Oct. 11, 1930, in San Antonio. He grew up in Dallas, married Shirley Lee Melton in 1950 and graduated the following year from his hometown’s Southern Methodist University with a degree in business administration.

Johnson enlisted in the military at age 20 and served during the Korean and Vietnam wars. He was 35 on April 16, 1966, and flying a night mission carrying loads of napalm, when his aircraft came under heavy enemy fire over Vietnam.

The gun of Johnson’s F-4 Phantom II jammed and the plane was hit. Its right engine caught fire, forcing Johnson and co-pilot Larry Chesley to eject, and the future congressman broke his arm and back and dislocated his shoulder.

Johnson recalled trudging through the jungle before being surrounded by North Vietnamese soldiers who took him to the infamous Hoa Lo Prison, better known as the “Hanoi Hilton.” He endured what he would later describe as a 3-foot by 8-foot, rat-infested “dark and filthy cell.”

“Forty-two of those months were spent in solitary confinement with 10 other fine American patriots because the Vietcong labeled us ‘die hard’ resistors,” Johnson wrote in 2015.

He recalled tapping code on the wall to communicate with other Americans being held, and that “our captors would blare nasty recordings over the loud speaker of Americans protesting back home.”

While speaking on the House floor in 2003, Johnson said his faith only got stronger through captivity. He recalled how one day his captors put him against a wall and promised to execute him with machine guns.

He was released and flew out of Hanoi on Feb. 12, 1973. He earned a master’s degree at George Washington University in Washington in 1976. He retired from the Air Force three years later and began a home-building business. He was elected to the Texas Legislature in 1984 and went to Congress following a special election in 1991, after Rep. Steve Bartlett resigned to become Dallas mayor.

Representing Plano and other conservative northern suburbs of Dallas, Johnson was known for his work on veterans’ affairs and for his efforts to bolster the financial standing of the Social Security program. He took office backing term limits, yet he stayed in Congress more than double his promised maximum of 12 years.

When Bill Clinton ran for president in 1992, Johnson and other Republican military veterans in Congress alleged that Russian intelligence lured Clinton to Moscow during the Vietnam war when “I was sitting in a POW camp in Vietnam eating fish eyes and pig fat.” Questions about Clinton’s patriotism dogged him during his first campaign, but the allegations made by Johnson and the others were largely soon forgotten.

As a prisoner of war, Johnson shared a cell with McCain, who would later become a U.S. senator from Arizona. But the pair later clashed on political issues — including McCain’s efforts to eventually help normalize U.S. relations with Vietnam. Still, Johnson criticized Trump for suggesting McCain was no hero.

“Comments like those of Donald Trump, or any other American, suggesting that veterans like Senator John McCain or any other of America’s honorable POWs are less brave for having been captured are not only misguided, they are ungrateful and naïve,” Johnson wrote in 2015.

In February 2018 — marking the 45th anniversary of the operation that led to his release — Johnson donated a chipped green tin cup issued by his captors and tube of toothpaste he smuggled out of North Vietnam to the Smithsonian’s National Museum of American History. Johnson recalled then how he and other prisoners would communicate by tapping on the walls and how he’d hold his cup against them to amplify sounds and better hear their messages.

In his autobiography, “Captive Warriors: A Vietnam POW’s Story,” Johnson wrote of the cup: “For me, it symbolized our war of resistance for seven long years. It had been a means of communication and, as such, a means of survival.”

Johnson’s wife died on Dec. 3, 2015, at their home in Plano at age 85. He is survived by his adult daughters, Gini Johnson Mulligan and Beverly Johnson Briney, and 10 grandchildren. His son, James Robert “Bob” Johnson, died in 2013 at age 61.