CRAWFORD, Texas - It's Veterans Day weekend, and some who served at a high personal cost spent it with former President George W. Bush on his ranch in Crawford.

It was Bush's annual ride with wounded warriors to salute their sacrifice and service.

As part of the 2019 Warrior 100K, President Bush expressed his gratitude, and then got a move on.

With Bush leading the way, the 2019 Warrior 100K riders hit the trail.

All of them volunteered to serve, but came to Crawford Saturday morning to ride

Staff Sgt. Victor Diaz, who is now a Richardson police officer, served in Iraq and Afghanistan.

"And just over the years, after deployments, you come back and you are just not the same," Diaz said.

His wounds are not obvious, but Diaz said the comradery on the trail helps.

“PTSD is one of those things that we get exposed to. So many things when we are overseas that the normal person is probably not meant to see,” Diaz said. “Luckily for me, I have a blessed wife whose been with me since high school and she's stuck with me through all the tough times. Without her, I don't know where I'd be.”

"I came home from Iraq in 2006 without an injury, and I was hit by a car bicycling to work. Life happens," she said.

She recovered and served 10 more years. Colonel Collins has ridden in this event before.

"What we have found here is it's really the peer-to-peer counseling is so helpful. We have phenomenal medical professionals in the world, but when somebody can talk about where they've been and they are on the other side of something you are struggling with, it's really powerful and it give us hope," she said. 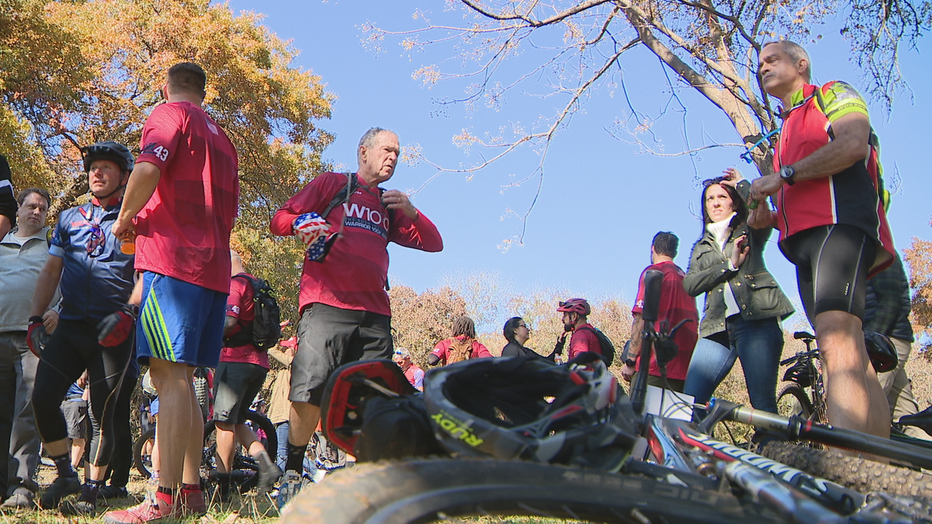 President Bush said essentially the same thing. The ride is important, he said, but the breaks may be more important. It's the bonds and the shared experiences that heal.

Humor helps retired Staff Sgt. Kenneth Butler. He was badly wounded and lost his right arm in an IED attack,

"My buddies patched me up, got me to a combat hospital, and recovery started there," he recalled.

Butler was in the hospital for more than two years. He was awarded a Bronze Star. He rode in the first Warrior 100K.

President Bush pushes the riders hard, and the warriors respond, just like they always did. Every one of them acknowledges they were hurt, but also healing.

The first Warrior 100K was in 2011. It's part of the Bush Institute's Military Service Initiative, highlighting men and women wounded in the global war on terror.