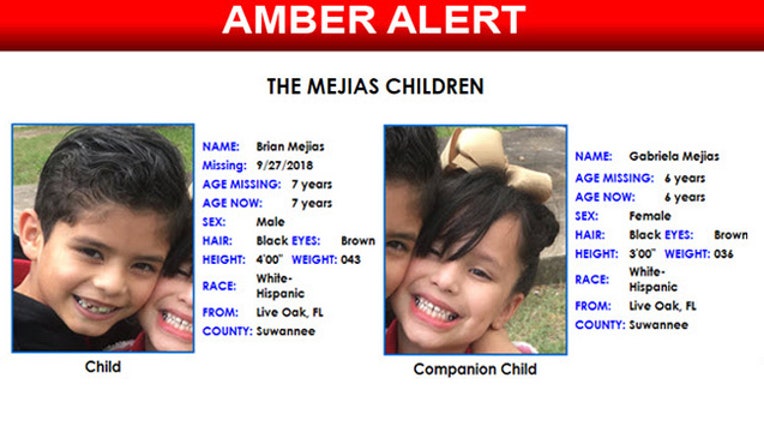 LIVE OAK, Fla. (FOX 13) - An Amber Alert has been issued in Florida for a missing 7-year-old boy and a 6-year-old girl, last seen in Suwannee County.

The Florida Department of Law Enforcement asks the public to be on the lookout for two children:

Brian Mejias is described as a white-Hispanic male, 7 years old, 4 feet tall, 43 pounds. He has short, black hair with a hard part on the left, and brown eyes. He is missing teeth on the top right and has a scar below his hairline on the right side of his forehead.

Gabriela Mejias is described as a white-Hispanic female, 6 years old, 3 feet tall, 36 pounds. She has long, black hair, which reaches past her waist, and brown eyes. She has noticeable dimples, and all her teeth are crowned except the front four.

They may be traveling in a black Toyota Camry, with a Texas license plate. The Camry has dark tinted windows and is possibly being driven by a male named Rochie .

This vehicle is possibly traveling in a caravan of three vehicles.

One of the other vehicles is a grey Chevy Tahoe or Suburban with lightly tinted windows and a Texas license plate.

The other possible vehicle is a beige Chevy Tahoe or Suburban with no tint; it is possibly being driven by a male named Melecio and occupied by a female named Alexia.

There are possibly a total of 13 subjects, plus the two children.

The children were last seen in the 900-block of Ohio Avenue North in Live Oak, Florida.

If you have any information on the whereabouts of these children please contact the Suwannee County Sheriff's Office at 386-362-2222 or 911. #FLAMBER.