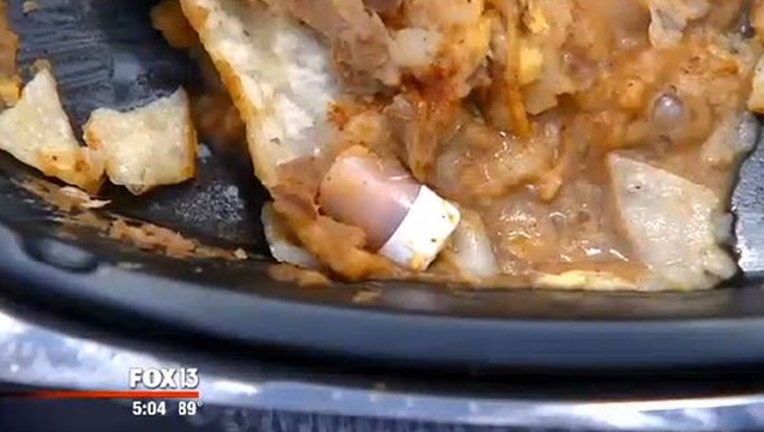 It used to be Kailynn Roland's constant curbside pit stop for comfort.

"It was my favorite food," she said Tuesday.

But today, Kailynn Roland is no longer taken by Taco Bell. Monday, she and her boyfriend decided to swing by a Tampa-area location's drive-thru for a late night treat.

"We came through Taco Bell and got some nachos," Joseph Richardson said.

But once Kailynn got to the bottom of her triple-layer entree, she says she found a full-length, acrylic French-tip fingernail buried in with the beans.

The two tell us employees got their order wrong the first time. They say the nail-in-the-nachos order was their replacement. When they called to complain, again, they say the manager gave them the wrong number to Taco Bell's corporate office.

"I was a manager at a McDonald's for four years. If we had anything like this happen -- right then, right there, when they called back in -- we would have shut service down and investigated it," Richardson said.

"Probably never again, and if I do eat at a Taco Bell, it will not be at this location," he said.

Richardson says all they want is accountability.

"One of the things I'd really like is an apology from the Taco Bell corporation," he added.

Taco Bell's corporate office tells FOX 13 News they are investigating the incident and will retrain staff members if they find it necessary. They also told FOX 13 the couple did accept the $40 in gift cards. Richardson says they did not accept the gift cards, and asked Taco Bell not to send them.