Krysta Overton, an external affairs officer for the Federal Emergency Management Agency, talks to Good Day about the plans to get vaccination sites up and running in Dallas and Arlington.

The goal for each site is to vaccinate about 21,000 people per week.

And even though there are hundreds of thousands of people still waiting for vaccines in Tarrant and Dallas counties, the vast majority of them are not on the federal government's priority list.

FEMA will pull from the Dallas County waitlist. But right now, there’s not enough people from those zip codes who are registered for the vaccine.

The Fair Park vaccination hub will become a major community vaccination center run by the federal government. Soldiers from Fort Riley in Kansas and FEMA will be giving new first doses to eligible people living in 17 zip codes targeted for being underserved.

"They are going to be providing 3,000 first doses a day for the first three weeks," said Dallas County Judge Clay Jenkins.

FEMA will pull from the Dallas County waitlist. But right now, there’s not enough people from those zip codes who are registered for the vaccine.

"We are asking every city faith community that is in touch with one of those zip codes to register people as soon as possible," Jenkins said.

About 18,000 people from the 650,000 deep waitlist are signed up in those zip codes. So instead of additional doses to help knock that waitlist down, they'll be searching for new people to register. 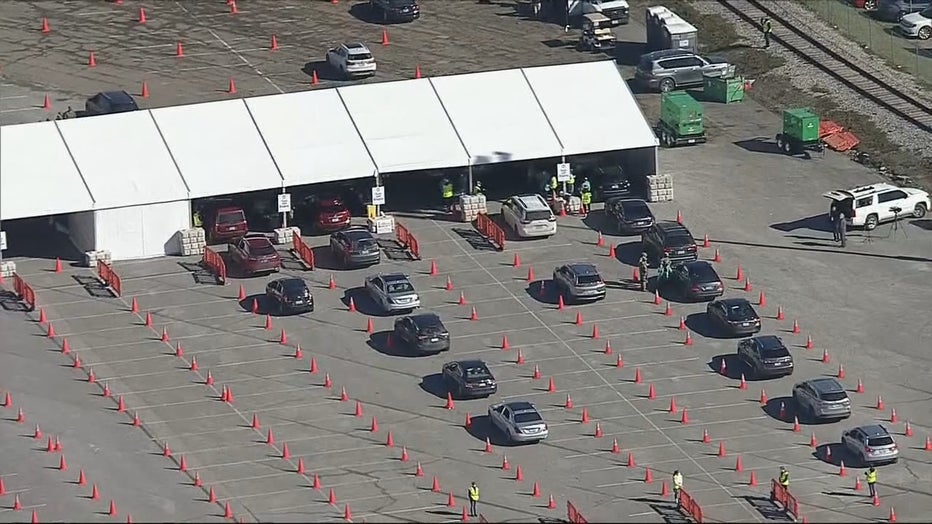 "It will lead to months longer in heard immunity if they don't give those vaccines," Jenkins said.

Baylor, Parkland and UT Southwestern got additional doses this week for their programs. We asked the Texas Department of State Health Services why the doses were cut.

"We need to make sure that we are allocating vaccine equitably across the state," said Imelda Garcia, Associate Commissioner of Laboratory and Infectious Disease Services. "And with additional doses coming just to those three counties, the recommendation is sending additional doses to parts of the state that have not received nearly as much vaccine per capita."

For now, this is a one-week impact. But if it continues, it will mean those on the waiting list will wait even longer.

"It should work since we have someone focused on those 17 zip codes," Jenkins said. "We should be able to get to grandma faster."

Jenkins says if the state increases to the normal amount, the county will go from 43,000 doses a week to nearly 65,000.

Starting Wednesday, FEMA will be vaccinating North Texans at Globe Life Field- to administer around 3,000 first doses a day. And then four weeks later, FEMA will shift over to AT&amp;T Stadium to give out both first and second doses.

Leaders over in Tarrant County expressed frustration over the state's decision to take away their doses.

Starting Wednesday, FEMA will be vaccinating North Texans at Globe Life Field- to administer around 3,000 first doses a day. And then four weeks later, FEMA will shift over to AT&T Stadium to give out both first and second doses.

Roughly 140 medical professionals from the U.S. Army and Marine Corps will go to Arlington to help run the site.

Tarrant County Public Health also learned it didn’t get any additional doses from the state.

The city of Arlington is only getting the FEMA doses, which are going to be used for people living in specific zip codes.

"I’m not going to say I was misled," he said. "I’ll say that we misunderstood because we made it very clear that every turn that these were 21,000 extra vaccines that were coming with the FEMA people."

Right now, the county can only administer second doses so it may have to scale back.

Judge Whitley is pressing the state to reconsider the county’s allocation in the coming weeks.

"Give us the vaccines and let us decide how to get those shots in the arms," he said. "But by telling us that all of the first shots are going to be out at Globe Life and AT&T Stadium, that’s not letting us decide how we can be the most effective that we can be."

FEMA will pull from the Tarrant County registration list, but it has different eligibility criteria than the state.