Feds look to speed up pace of COVID-19 vaccinations nationwide

Texas expanded vaccine availability beyond first responders and medical workers in Group 1A nearly three weeks ago. Azar says all states should be administering to Group 1B by now, as well.

The federal government, in an attempt to speed up vaccinations, expanded the recommended minimum age for vaccine recipients from 75 to 65 – something Texas was already doing.

Health and Human Services Secretary Alex Azar also said Tuesday the government will change priorities for which states get more vaccine. The message is roll it out, and how much vaccine a state gets will now depend on how fast it’s getting used instead of population.

"We are now at an important juncture in the vaccine program," Azar said.

As more vaccination sites slowly come online, like a Denton drive-through at UNT Discovery Park, Azar says the order is do more and do it faster. The supply is there, expressing confidence in production.

"We are 100 percent committed to ensuring there a second dose is available for every American who receives a first dose," Azar said.

Texas expanded vaccine availability beyond first responders and medical workers in Group 1A nearly three weeks ago. Azar says all states should be administering to Group 1B by now as well -- those 65 and older or those with underlying conditions.

He told states not to get hung up on completing any one group before moving on.

"Think of it like boarding an airplane. You might have a sequential order in which you board people but you don’t wait until literally every person from a group has boarded before moving on to the next," Azar said. 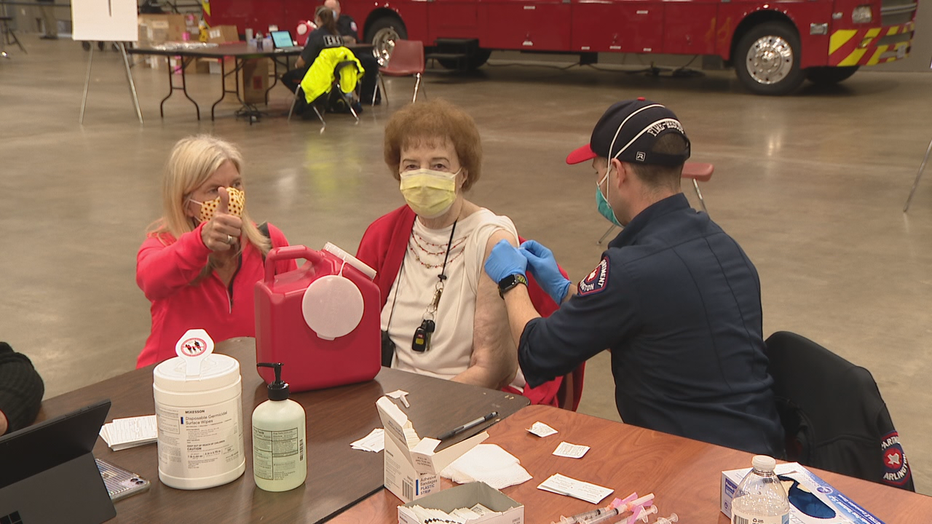 He also wants to expand who can administer vaccine, with the focus shifting away from hospitals in favor of more accessible mega sites and pharmacies. This week pharmacies and grocery chains in Texas received no vaccine from the state for the general public.

"Hospitals made sense as the early distribution sites when the focus was on healthcare workers. But they are not where most Americans go to get their vaccines,"

According to Texas State Health Services, the state has reported using 51 percent of its vaccine. Bloomberg’s Vaccine Tracker puts Texas just above average compared to other states.

Azar says some states with low rates of administering the vaccine may be due in part to an issue reporting the information. They’re allowed 72 hours.

Those states having trouble meeting the deadline will have to resolve the issue in the next 2 weeks — when HHS starts basing allotments on who’s using the vaccine the fastest.

"In other words if you are not using the vaccine that you have the right to, then we should be rebalancing to states that are using that vaccine," Azar said.

Azar was emphatic supply would meet demand, but he did say if there was a glitch in the system the focus would revert to making sure everyone who got a first dose gets a second -- before more people got a first shot. He says the science says they need to administer the second dose within a certain time frame and they’re committed to making that happen.

Good Day talks to Dallas County Judge Clay Jenkins about the effort to get older residents vaccinated quickly and efficiently. There have been some hiccups in the process.