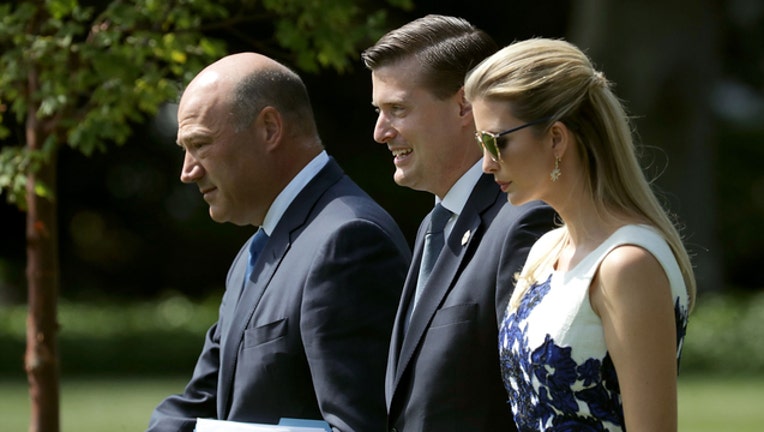 Wray said the bureau closed its background investigation on Rob Porter in January, weeks before the allegations were published.

That timeline called into question White House assertions that Porter's "background investigation was ongoing" when he resigned his position, and that the first the White House learned of the detailed allegations against him was last Tuesday.

Porter had been serving with an interim security clearance while his background check was pending, the White House said, a common occurrence for officials in a government facing a backlog of hundreds of thousands of such reviews.

As questions swirled about how Porter kept his access to highly sensitive information and President Donald Trump despite accusations of domestic violence, the administration's intelligence chief told The Associated Press that the government's system of security clearances for top officials is "broken" and must be completely overhauled.

Dan Coats' assessment in a telephone interview came just before he briefed lawmakers on Capitol Hill about global threats facing the United States. Coats was immediately confronted Tuesday by a top Democratic senator about continued questions about Porter, who resigned as Trump's staff secretary after the stories emerged detailing his ex-wives' accounts of abuse.

"We have a broken system and I think everybody's come to agree with that now," Coats told the AP.

As for Porter, Wray said the FBI submitted a "partial report on the investigation in question" in March 2017 and a completed background investigation in late July. Soon after that, the agency received a request for a follow-up inquiry, and it provided that information in November, Wray said.

He did not say who requested the follow-up. "And then we administratively closed the file in January, and then earlier this month we received some additional information and we passed that on as well," he added without elaborating further.

Wray said he was "confident" that the bureau followed proper protocol in investigating Porter.

Coats called for a "revolutionary change" in how the U.S. government vets its own people. He said what's needed is a process that takes advantage of new technologies and information on social media to provide "early awareness of individuals." He said such an approach would be faster and more effective than an investigation "having to go to 19 different places to talk to people, neighbors and school classmates and so forth."

"We have to basically start with a clean sheet and say, 'What can we do better to make sure that we get the correct background info necessary to certify that someone should be working within our community and in the government?'" Coats said. "But how can we do it in a way that doesn't leave us with hundreds of thousands waiting to be looked at and certified, with key slots open in various agencies?"

"We have moved this to a very top priority because it is really undermining our ability to get the right people into the right place at the right time," the director of national intelligence added.

Talk of reforming security clearances is hardly new. Some 700,000 reviews have stacked up across the government, leading agencies like the Defense Department to inadvertently issue interim passes to criminals - even rapists and killers - prompting calls for better and faster vetting of people with access to the nation's secrets. It currently takes about four months to acquire a clearance to gain access to "secret" information on a need-to-know basis, and nine to 10 months for "top-secret" clearance.

The questions about Porter's behavior and ability to secure an interim clearance have only accelerated the demands for a better process. President Trump's White House has stressed that background checks are handled by the FBI and other intelligence agencies through the same process that administrations have relied on for decades.

Checking federal employees and private contractors is a laborious process that requires an extensive background check and an effort to judge a person's trustworthiness. Ninety-five percent of all background investigations are conducted by the National Background Investigations Bureau, which does some of the work itself and contracts the rest to private firms.

"We need to do more to reform the broken security clearance system," Sen. Mark Warner, the Senate intelligence committee's top Democrat, told Coats at a hearing Tuesday, noting that government auditors had declared the current program as "high risk." He said the inefficiency was "costing us millions of dollars," and hurting efforts to recruit and retain intelligence officials.

The government hasn't said how many interim clearances have been issued, but outside experts say they could total more than 200,000. People being investigated for interim clearances are subject to background checks, too, but quick access to state and local records can be challenging.

Coats told the AP it's necessary, "particularly in a new administration" or one with turnover, for interim security clearances to be granted.

"But if you do that, it has to be a specific interim with controlled access and limited access, and that has to be clear right from the beginning," he said. "You can't just say an interim allows me to do anything."