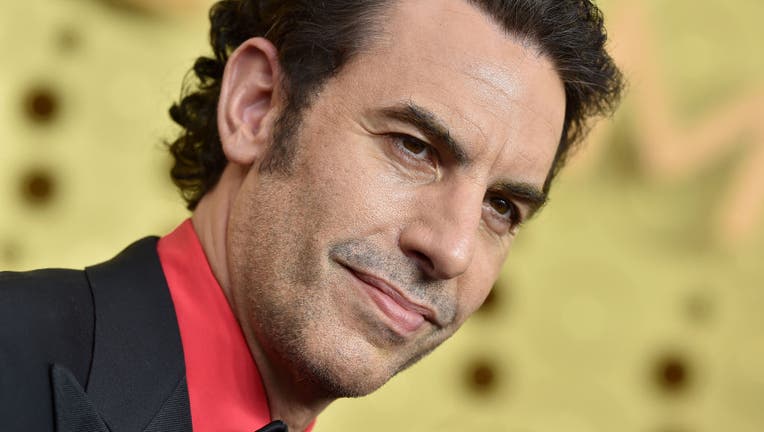 Video recorded of a performer singing offensive lyrics at a rally hosted by Washington Three Percent, a far-right group, was allegedly an elaborate prank carried out by “Borat” actor Sacha Baron Cohen, according to the group’s former leader.

While the performer appeared to be wearing a disguise and a stereotypical farmer costume, making it hard to determine for certain that it was indeed Cohen, one thing is for certain: The the rhetoric being belted out was offensive, and some in the crowd were filmed singing along.

Matt Marshall, 36, is the founder and former leader of the Washington Three Percent group that held the rally, according to an interview he did with NPR.

Marshall was the promoter and emcee at the March for Our Rights 3 rally that was held in Olympia, Washington, according to NPR.

The event's disastrous ending — a racist singalong seemingly staged by a prankster who many have speculated to be Sacha Baron Cohen — went viral over the weekend.

A group called Back to Work USA offered to pay for the rally and all of its setup costs about a week before the event was set to take place, Marshall told NPR.

Marshall and the other organizers were skeptical of the group at first, but were reassured when Back to Work USA shelled out nearly $50,000 in setup costs for the event.

"I mean, they played the game," Marshall told NPR. "We talked to them about how frustrating it was to be labeled racist, and they agreed with us. Like, we really let the guard down and trusted them."

The rally started off according to plan, Marshall said, but organizers learned that a bluegrass act had been added at the last minute. "It all looked like it was playing out, checking out," Marshall told NPR. Then, the unscheduled performer came onto the stage.

"A guy that's like wearing almost a clown suit of red, white and blue gets up there," Marshall said. "Obvious disguise. Like a fake nose and chin. And he starts playing and the first thought when you hear his voice is, 'Dude, is this like a bad impression of Borat?'"

The overalls-clad performer belted out racist and anti-Semitic lyrics, prompting some members of the audience to join in on the singalong.

Marshall and his friends tried to rush the stage and cut the mic, but they were stopped by Back to Work USA security guards, he told NPR. After a struggle between the rally-goers and the guards, Marshall said, the production crew left.

Video released on social media of the spectacle drew the attention of many people who started to point out specific features that led them to believe this was a prank orchestrated by Sacha Baron Cohen in the name of his TV show, “Who Is America?”

Footage of the event showed some attendees booing the performance and waving for them to get off the stage, alongside a few who sang along with the offensive lyrics.

"It's sad, it's unfortunate that some people chanted back," Marshall told NPR.

The group posted to Facebook, also alleging that Cohen was the disguised farmer and renouncing any of the offensive remarks made during the performance.

A quick search on Google for the Back to Work USA website renders an unreachable page, further calling into question the legitimacy of the organization.

But this wouldn’t be the first time Cohen has pulled similar stunts.

In one of his failed attempts, Cohen entered a Riverside, California gun store pretending to shoot a documentary about a Hungarian immigrant purchasing a gun for “Who Is America?” but was busted by the business owner.