A day after surveillance video from the Uvalde mass shooting was leaked to the media, families are grappling with what they finally saw for themselves. They reacted in shock to footage that shows increasingly armed officers waiting for commands outside a classroom where children and teachers were dying.

A day after surveillance video from the Uvalde mass shooting was leaked to the media, families are grappling with what they finally saw for themselves.

They reacted in shock to footage that shows increasingly armed officers waiting for commands outside a classroom where children and teachers were dying.

We’re now hearing from family members and a teacher after they saw surveillance footage from inside Robb Elementary during the mass shooting.

Texans and the rest of the country are reacting to surveillance footage showing the 77 minutes it took for law enforcement to kill the gunman who shot and killed 19 students and two teachers inside Robb Elementary in Uvalde. 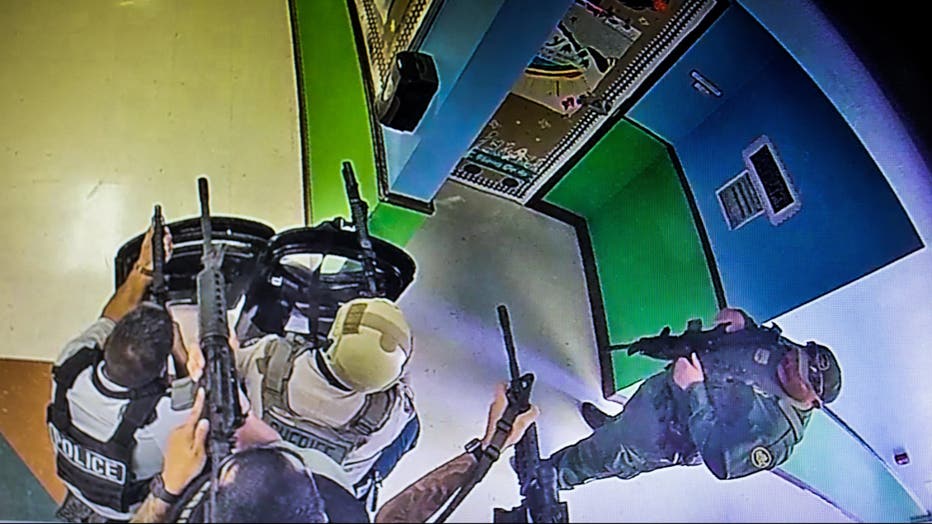 Video footage recorded inside Robb Elementary School in Uvalde at 12:04 p.m. May 24. Authorities stormed the classroom at 12:50 p.m. (The Texas Tribune)

"They just stood there waiting for this evil person to finish what he was doing," she said.

Reyes was shot in the arm. He was the only survivor from classroom 111. He lost 11 students. Reyes says the hallway footage of law enforcement is difficult to watch.

"They should’ve acted fast," he said.

Meanwhile, some family members of Uvalde victims as well as some related to victims of other mass shootings marched in Washington D.C. on Wednesday.

Some family members met with White House officials following the march. They’ll meet with Texas officials Sunday for a first look at the report from the Texas House committee investigating the shooting.

Surveillance footage was supposed to be shown to families for the first time on Sunday, but it was leaked to the Austin American-Statesman and KVUE-TV.

Reyes says after he was shot, the gunman poured water on him, dropped a phone on him and splashed blood on his face. He says his students had been hiding under a table pretending to sleep.

"I just loved them so much," he said.

Ones who now have a look at what happened outside the classroom for 77 minutes say the images are soul crushing.

"Am I glad they showed it? Yes," Valencia said. "So the whole world could know these cops didn’t even go in there and save these kids."

Coincidentally, the teacher interviewed in the story is the cousin of Uvalde Schools Chief of Police Pete Arredondo, who many blame for the slow response. The teacher however says he is not blaming him personally.