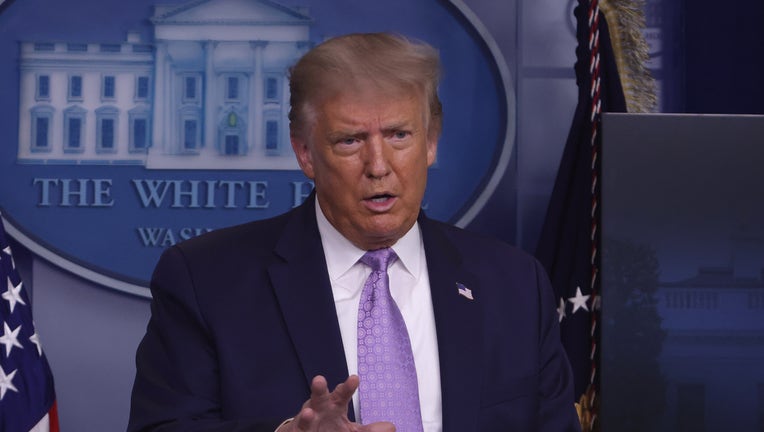 Facebook’s action was followed shortly by Twitter, which said that the Trump campaign account, which originally tweeted the video that was apparently retweeted by the president, would be required to delete the video from its platform before being allowed to tweet again.

In the video clip posted to Facebook and retweeted on Twitter by the president, Trump claims in an interview on “Fox & Friends” that the novel coronavirus will “go away like things go away,” and that children are “almost, and I would almost say definitely” immune to the disease.

“If you look at children, children are almost — and I would almost say definitely — but almost immune from this disease,” Trump continued. “So few, they’ve got stronger — hard to believe, I don’t know how you feel about it — but they have much stronger immune systems than we do somehow for this, and they do it, they don’t have a problem. They just don’t have a problem.”

Trump went on to claim that N.J. Gov. Phil Murphy told him that “only one person under the age of 18” died of COVID-19 out of “thousands and thousands” of cases in the state. “And I think that person also had diabetes, a young person,” Trump said.

“And especially when you get younger than that, it doesn’t have an impact on them, and I’ve watched some doctors say they’re totally immune. I don’t know, I hate to use the word ‘totally,’ because the news will say ‘oh, he made the word totally and he shouldn’t have used that word,’ but the fact is that they are virtually immune from this problem, and we have to open our schools,” Trump said.

The video was apparently retweeted by Trump earlier Wednesday on Twitter, but Facebook took the initial action against it — a first for the company relating to the deletion of a post by the president.

A Facebook spokesperson said, "This video includes false claims that a group of people is immune from COVID-19 which is a violation of our policies around harmful COVID misinformation."

The spokesperson confirmed that it was the first time the company has taken down a post by the president specific to COVID-19 misinformation.

Trump’s claims came despite recent instances in which outbreaks have directly impacted children and the people caring for them.

A Colorado elementary school teacher gave a tour of her classroom while expressing her doubts over schools reopening amid the ongoing COVID-19 pandemic.

An overnight YMCA camp in Georgia that consisted of nearly 600 people reported that over 250 tested positive for the coronavirus last week.

Campers ranged in age from 6 to 19, and many of the staffers were teenagers.

The camp followed disinfecting rules and required staff to wear masks, but campers didn’t have to wear face coverings. Health officials said “relatively large” groups of kids slept in the same cabin where they regularly sang and cheered, likely leading to spread of the virus.

Test results were available for 344 people and 260 of them — about three-quarters — were positive.

The Kanakuk camp in Lampe, Missouri, ended up sending its teenage campers home. On July 3, the local health department announced 49 positive cases of the COVID-19 virus at the camp. By July 6, the number had jumped to 82.

RELATED: Twitter says it will add an edit button to tweets when ‘everyone wears a mask’

Trump has repeatedly pushed for children to return to schools, environments that many health experts have warned could help spread the coronavirus exponentially. A recent study published in JAMA Pediatrics on July 30 found that children “can potentially be important drivers of SARS-CoV-2 spread in the general population,” noting that ”children with high viral loads are more likely to transmit.”

Researchers found that while infected kids older than 5 had similar levels of the virus in their system as adults, children younger than 5 had “significantly greater amounts.”

The Trump administration says the science “is very clear,” but many doctors who specialize in pediatrics and infectious diseases say much of the evidence is inconclusive.

“There are still a lot of unanswered questions. That is the biggest challenge,” said Dr. Sonja Rasmussen, a pediatrics professor at the University of Florida and former scientist at the U.S. Centers of Disease Control and Prevention.

Dr. Anthony Fauci, the nation’s top infectious-disease expert, warned Monday: “There may be some areas where the level of virus is so high that it would not be prudent to bring the children back to school.”

“So you can’t make one statement about bringing children back to school in this country. It depends on where you are,” he said.

The United States has more confirmed COVID-19 cases than any country in the world.

Not knowing if children are infected makes it difficult for schools to reopen safely, many experts say. Scarce data on whether infected children — including those without symptoms — easily spread the disease to others complicates the issue, said Jeffrey Shaman, a Columbia University infectious disease specialist.

Symptoms include fever and problems in at least two organs, often including the heart. Digestive problems are common, and some cases have been mistaken with Kawasaki disease and toxic shock syndrome. Perhaps the biggest unknown is whether permanent damage to lungs and other organs can result. The virus is too new to know for sure.