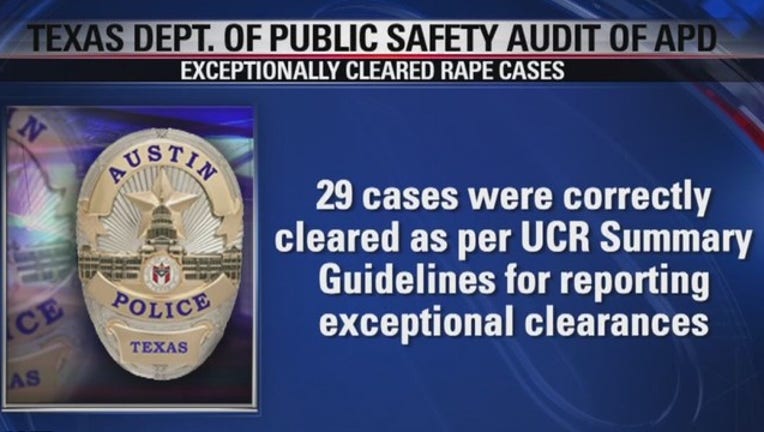 That report said about one-third of cleared cases during three months in 2017 were done so incorrectly.

APD requested the outside audit in early December after concerns were raised regarding the closure of numerous sexual assault cases.

“We reached out to DPS and requested that they come in and review our use of the UCR codes based on concerns that have been aired in the past, as well as our interest in making sure that we are using the UCR codes in accordance to the guidelines, and that we are reporting accurate data to the community,” said Austin Police Chief Brian Manley.

Those guidelines require a case listed as “exceptionally closed” has identified an offender, the offender's location and that enough evidence has been gathered to support an arrest.

“It is in no way an indication of the quality or completeness of that investigation that underlied, it is merely the code that is used when investigators close that out,” Manley said.

DPS looked at all cases from January, November and December of 2017 to complete the audit, 95 cases in total.

According to the preliminary report, 30 rape offenses that were exceptionally cleared did not meet the criteria for exceptional clearances as defined by UCR guidelines.

“What we don't know, because we don't have the final report, is what reason is behind that,” said Manley.

14 rape offenses were determined to be unfounded through investigation, but were reported as exceptionally cleared. Unfounded cases are cases an investigator either believed didn't happen or where a survivor recants their report.

“This is something that's difficult, I know, for our investigators, who very well understand the difficulty survivors have coming forward and participating in the process, and the possibility that a recant is not an actual recant and it's hard for them at times, I think, to look at that,” Manley said.

DPS said 15 incidents reported by APD as rape offenses did not meet the UCR definition for rape.

“These were cases they did not believe we should have titled ‘rape’ in the first place, and this may indicate a potential over reporting of rape in those three months,” said Manley.

DPS reported six cases indicated that APD did not follow the UCR hierarchy rule for reporting.

“Under UCR reporting, if you have an incident that has multiple offenses, say you had a robbery that resulted in a homicide, homicide is the highest level offense so you would report that as a homicide per the hierarchy rule,” Manley said.

Meanwhile, two past incidents that could have been cleared years ago were cleared in 2017.

“Even if a case were exceptionally cleared, it's not closed. If additional information had come forward, the detective would've immediately begun working that case,” said Manley.

According to the report, only 29 of the 95 cases reviewed were correctly cleared. That's something APD said they will be working to correct.

“Immediately we reached back out to DPS's Incident Reporting Bureau and asked them if they would assist us in retraining our detective bureau so that we could ensure that every detective was current on their knowledge and was following appropriate guidelines,” Manley said.

APD said DPS will help retrain supervisors January 8 and 9. Supervisors will then retrain detectives beginning January 14. Following that training, all cases from 2018 will be reviewed to make sure they were accurately categorized.