Creating an emergency fund and finding additional sources of income are key.

NEW YORK - U.S. equity markets ended the session mixed as investors took in record job losses amid speculation tensions are rising between the U.S. and China over Beijing's handling of the coronavirus crisis.

President Trump, answering a question at the White House, signaled China "may or may not" make good on certain terms of the phase one trade deal.

Selling picked up in the final hour of trading with the Dow Jones Industrial Average falling over 218 points, oo 0.91 percent, while the S&P 500 slipped 0.70 percent. The declines were the first of the week for both indexes. Meanwhile, the Nasdaq Composite held onto modest gains of 0.51 percent.

As the losses mount, states are turning their attention to reopening their economies. Arkansas allowed barber shops, tattoo parlors and other businesses to resume operations on Wednesday while Kentucky permitted outpatient surgeries.

It’s “possible” the death toll from COVID-19 will increase as restrictions are lifted, President Trump said on Tuesday evening, but “we have to get our country open.”

Looking at stocks, Walt Disney Co. earned $460 million in its fiscal second quarter, down 92 percent from a year ago, as its parks and live entertainment business took a $1 billion hit from closures due to COVID-19.

General Motors earned $294 million as the automaker took a $1.4 billion hit from disruptions caused by COVID-19.

Beyond Meat swung to a first-quarter profit of $1.8 million, up from a loss of $6.6 million a year ago, as "food-at-home" demand drove sales 141 percent higher.

Video-game makers Activision Blizzard and Electronic Arts both beat on top- and bottom-line results as “stay-at-home” orders drove a surge in demand. 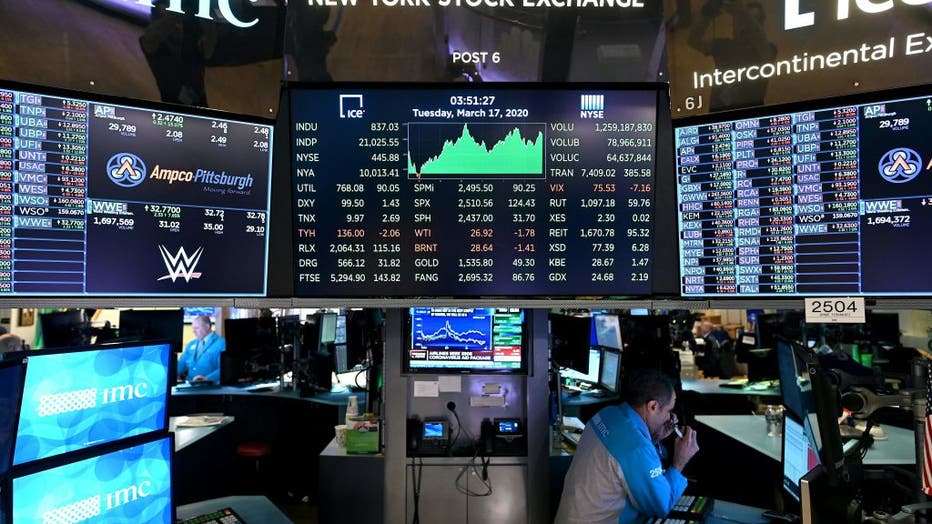 Traders work during the closing bell at the New York Stock Exchange (NYSE) on March 17, 2020 at Wall Street in New York City. (Photo by JOHANNES EISELE/AFP via Getty Images)

U.S. Treasurys slipped, causing the yield on the 10-year note to climb to 0.709 percent.