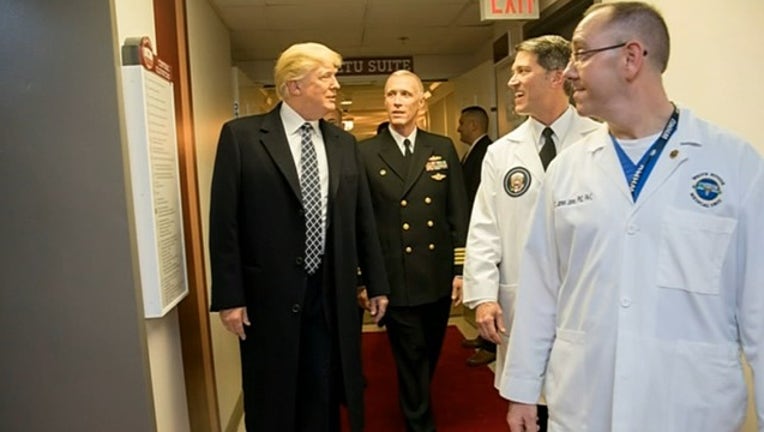 Ronny Jackson had issued a blanket declaration that Trump was in "excellent health" after last Friday's exam and promised to provide a fuller readout on Tuesday.

Trump's blood pressure was 122 over 74, and his total cholesterol was 223, which is higher than recommended.

Trump was 70 when he took office on Jan. 20, 2017, making him the oldest person ever elected to the presidency.

Trump's heart exam was normal, with regular rhythm and no abnormal sounds, which Jackson said led him to conclude with confidence that Trump "has a very strong and a very probable possibility of making it completely through his presidency with no medical issues." Trump has no heart disease.

The 71-year-old president performed "exceedingly well" on cognitive screening, which is not a standard exam for the checkup but which was requested by Trump. The doctor said he had "absolutely no concerns" about Trump's cognitive abilities. He speculated that Trump requested the exam in an attempt to beat back the narrative of the past few weeks that he is mentally unfit for office.

"He's very sharp. He's very articulate when he speaks to me," Jackson said. "I've never known him to repeat himself when he's around me. I found no reason whatsoever to think the president has any issues whatsoever with his thought process."

Trump last revealed details about his health two months before the November 2016 election.

Trump's cholesterol reading from Friday's exam was borderline high even though he takes a low dose of the statin drug Crestor. Jackson said he would increase that dose in an effort to get Trump's bad cholesterol, or LDL level, below 120; it currently is 143.

Trump's body mass index, or BMI, of 29.9 puts him in the category of being overweight for his height. A BMI of 30 and over is considered obese.

Jackson said he prescribed a diet lower in fat and carbohydrates, and exercise. He'd like the president to lose 10 to 15 pounds (4.5 to 6.8 kilograms) over the next year.

Despite the diet and cholesterol concerns, Jackson stressed that Trump's "cardiac health is excellent." He passed a battery of heart exams including a stress test that Jackson said showed an above-average exercise capacity for a man of his age, despite some calcium buildup in his arteries. He also takes a low-dose aspirin for heart health.

Jackson said Trump has avoided some big heart risks - he's never smoked and isn't diabetic - and has no family history of heart problems.

Trump did not undergo a psychiatric exam, but he did undergo a cognitive screening test. Called the Montreal Cognitive Assessment, it is designed to detect early signs of memory loss and other neurologic functions - and Trump had a perfect score, the doctor said.