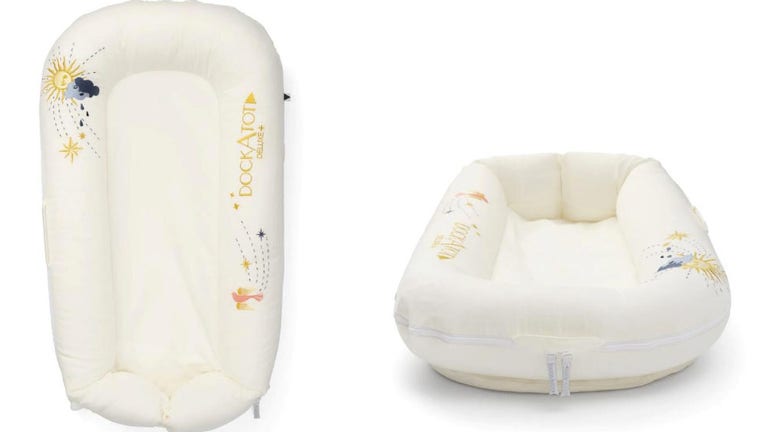 The DockATot Deluxe+ Dock is pictured in a provided photo. (Credit: CPSC)

In its statement, the U.S. Consumer Product Safety Commission (CPSC) cited multiple infant deaths associated with DockATot products. However, the product has not been recalled.

Under the new Infant Sleep Product Rule, the DockATot Deluxe+ Dock was determined to be unsafe for infant sleep because it is a flat product that doesn’t have a stand, doesn’t meet certain stability requirements, and doesn’t have a side height of at least 7.5 inches, according to the CPSC.

DockATot was notified in June that it should stop manufacturing its "DockATot Deluxe Plus Dock" product for failing to comply with the new rule, the CPSC said Wednesday. But the manufacturer continued to import the product despite being manufactured after that date, the CPSC added.

"It is unsafe for your baby to sleep in a DockATot Deluxe+; immediately discontinue its use," CPSC Commissioner Richard Trumka said in a separate statement this week.

"I encourage you to read the reports of infants’ deaths associated with DockATot products, as reported by members of the public," Trumpka said. "To access them, visit www.saferproducts.gov and type DockATot into the search bar, and you can read caregivers’ stories of their worst nightmares becoming reality using this product."

The news of DockATot’s violation comes ahead of the Safe Sleep for Babies Act, which will officially go into effect on Saturday. The law bans both padded crib bumpers and inclined infant sleep products and applies to all products in the marketplace, not just those that are manufactured after a certain date.

Most popular baby names of the 2010s

Why is DockATot Deluxe+ Dock not safe, according to CPSC?

Babies sleep the safest on their back, and on a firm, flat surface in a crib, bassinet, or play yard that meets federal safety standards.

The American Academy of Pediatrics has long advised caregivers to avoid soft and plush sleep surfaces, such as the DockATot, due to the risk of suffocation. The products are often not marketed as sleepers, but it’s common for babies to fall asleep while using them.

A study, conducted by researchers at Boise State University and published in June, highlighted the suffocation hazards of similar infant pillow products due to positional asphyxia, which is when the infant’s body position prevents normal breathing. The study also cited hazards related to rebreathing of CO2, when babies turn their heads into the padded walls and rebreathe their exhaled air — causing oxygen levels to drop.

In 2021, the Boppy Company issued a recall on roughly 3.3 million of its newborn loungers after they were tied to infant deaths.

Companies by law have to report an unsafe product to the CPSC, which is how many recalls typically begin, the agency notes on its website. Other recalls happen after the CPSC receives several consumer or media reports about a product, and the agency then works with the company to issue the recall.

DockATot did not immediately respond to a request for comment. The company states on its website that the Deluxe+ is "not intended for sleep," but similarly acknowledges that babies often fall asleep in them and parents should always supervise the baby while in the product.

Kids In Danger, a Maryland-based nonprofit that advocates for child product safety, said it believes that no infant lounger should be allowed for sale regardless of the manufacture date, and they should be removed from homes due to suffocation hazards.

In a statement, it also called on DockATot and the CPSC to "immediately recall the loungers to prevent child injuries, and for the CPSC to recall all hazardous infant loungers."