Matthew Dominguez, 32, who was arrested Thursday on a misdemeanor indecent exposure charge, could face a year in jail and be placed on the sexual offender list for 10 years, if convicted. Dominguez is currently on administrative leave from the police department.

According to prosecutors, Dominguez and two colleagues were dispatched to a home in San Jose on April 21 at 6:30 p.m. The family had a restraining order against their son, who suffered from mental illness and police were called to investigate a possible violation of that order.

He began speaking with the family's 23-year-old daughter.

"Officer Dominguez took interest in her and continued to interact almost exclusively with her," according to court documents known as the statement of facts.

The young woman told Dominguez where her brother might be, and he told his two partners to leave the house and try to find him.

Dominguez stayed back, court records indicate, and "milled around the home," keeping the daughter in view, his body camera video shows.

About 40 minutes later, the daughter asked Dominguez what she should do with her brother’s GPS monitor.

When she went to get it, Dominguez followed her.

The mother, called "Ms. S" in the court documents, joined them.

At this point, they were between the dining room and kitchen.

The daughter handed the GPS unit to Dominguez. 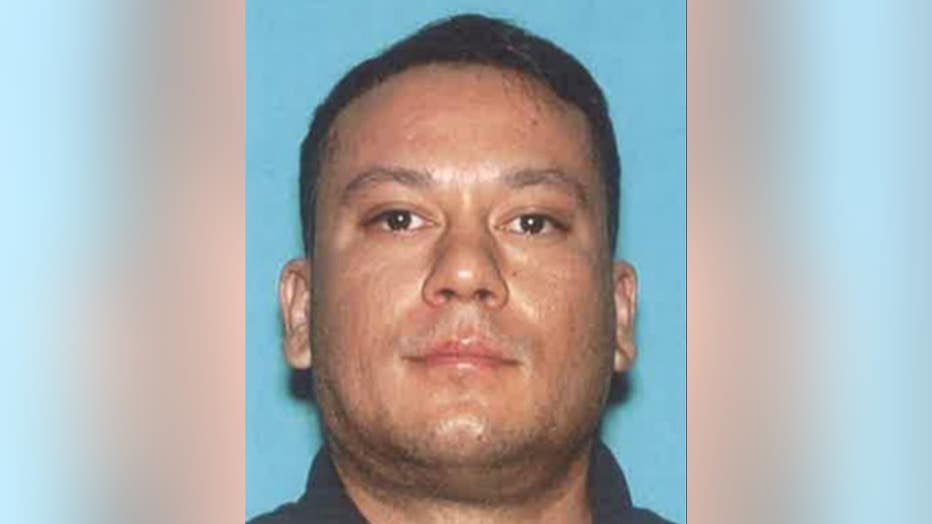 While she was discussing the GPS unit, the mother saw Dominguez "unzip his pants, place his hand inside his zipper and began rubbing his crotch," according to the court documents. "Simultaneously, the daughter saw him rubbing his crotch area."

The mother then asked her daughter to get her a glass of water, which the daughter mistakenly offered to Dominguez.

The mother again asked her daughter for another glass of water, and at that point, Dominguez followed the daughter into the kitchen and turned around to face the mother.

She told authorities that she saw Dominguez's penis "outside his pants fully exposed," court records state.

The mother and her daughter left the house and called for her husband. The daughter also called her uncle, who was nearby.

The father ran into the house and saw Dominguez "with his erect penis in his left hand and his right hand on the counter," prosecutors stated.

Dominguez then looked at the father, called "Mr. A," who "promptly turned around and left the house."

Two minutes later, Dominguez walked out of the kitchen and went back to work.

At that point, the father and the uncle reported Dominguez's behavior to the other officers on scene.

It's not clear from the court documents what happened with the brother.

It was also not immediately clear if Dominguez had an attorney to represent him. He is not in custody and his next court hearing is on June 22.

In an interview with KTVU on Thursday, Sgt. Sean Pritchard of the San Jose Police Officers Association, said that the handful of officers now being investigated don't represent the department.

But, he added that he feels the department really needs to take a hard look at its hiring standards and background process.

"Some of these are absolutely very serious criminal allegations and again, if they're proven to be true, then these individuals do not belong in law enforcement," Pritchard said.

In a highly unusual step, Police Chief Anthony Mata released public video of him literally walking Dominguez out the door – something the chief said he would do to any officer who acted criminally and besmirched the good name of the department. Police blurred Dominguez's face in the video.

Also, the District Attorney took the unusual step of releasing a booking photo of Dominguez on Twitter – something the office rarely does, if at all.

"The charged behavior is beyond disturbing," DA Jeff Rosen said in a statement. "Law enforcement officers respond to our homes to help crime victims, not terrorize, traumatize, and create new victims."

Mata now must deal with at least five officers who have recently faced with criminal and departmental violation allegations including: An officer who was drunk while searching for a kidnaped baby, a rookie officer who died of a fentanyl overdose, an officer who is under investigation for providing a meth pipe to a woman in exchange for information and another off-duty officer arrested for a DUI in Hayward.

In addition, the California state auditor recently found evidence of officer bias in some of California's largest police departments, including San Jose, departments had no clear plan to address the pattern of prejudice.

At a news conference this month, Mata said he would "not tolerate inappropriate behavior or criminal conduct when an officer violates the public's trust. They will be held accountable as these incidents are further investigated."

Mata added:  "As the leader of this organization, I want the public to hear from me. And I also want to make it clear that I will not make any excuses for the criminal conduct of our police officers. We are and should be held to a higher standard as what the public expects. And that's what I expect of our men and women of this department."

The city's top officials are now trying to see what they can do to remedy the situation, including a call from the mayor to mandate random drug testing of officers – something that the union contract currently does not allow.

"Nothing angers a good cop more than a bad cop," said San Jose Mayor Sam Liccardo. "And I know that the overwhelming majority of officers in this department are furious as I am."