DALLAS - Purple Heart recipients were honored on Saturday, on the 20th anniversary of 9/11.

The Department of Texas' Military Order of the Purple Heart proclaimed that the Dallas-Fort Worth National Cemetery the first Purple Heart VA Cemetery in the United States.

Veterans in the audience each showed up with their own story.

Camarillo added that this moment wasn’t about him.

"We are here for one reason, to remember them," he said.

Purple Heart recipients and veterans stood side-by-side on a historic day for the Dallas-Fort Worth National Cemetery. 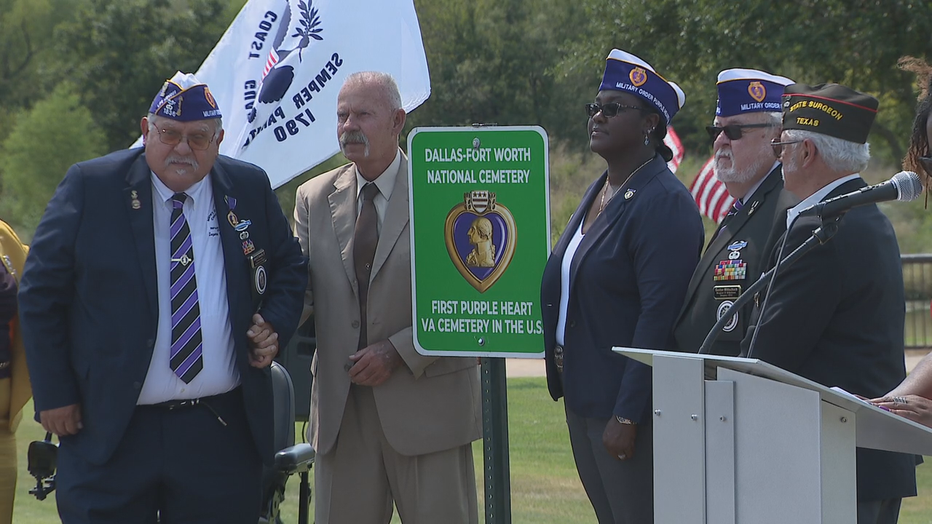 The 635-acre cemetery is now the first Purple Heart VA Cemetery in the United States.

"I know when I got the call saying we were nominated, I was all sorts of excited," recalled Larry Williams, director of the Dallas-Fort Worth National Cemetery.

It’s home to 75,000 headstones and the cemetery is expanding.

"It’s our job to take care of the veterans and their families, and that is what we are going to try to do," Williams said.

"The Purple Heart is the only medal that is given for purely merit, where nobody has a thing to say about it," Weisheit said.

The recognition was scheduled on the 20th anniversary of September 11th terror attacks.

They all shared a special bond of sacrifice for our country.

"When your country calls you go and you serve, you don’t ask questions," Weisheit added.

"The only reason this is a free country is because of the veterans," Camarillo said. "We are going to keep going forward and to remember them."