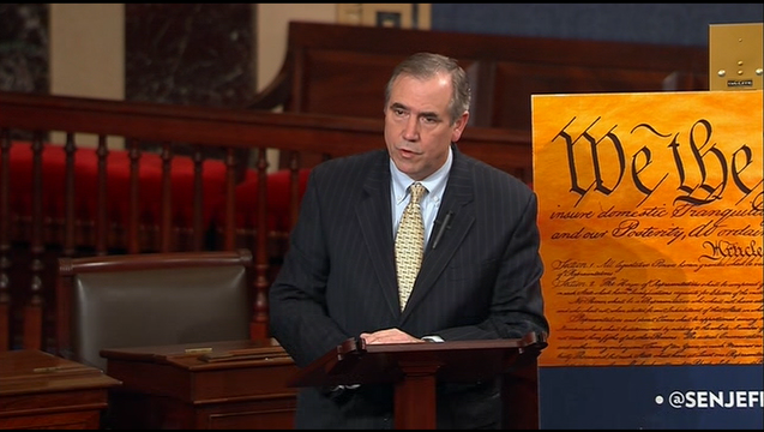 Oregon Democrat Jeff Merkley has been talking on the Senate floor in opposition to Supreme Court nominee Neil Gorsuch for several hours and plans to remain "as long as I am able."

Merkley's extended speech isn't a filibuster and won't delay debate or votes, but it's part of Democrats' effort to bring attention to the nomination.

Merkley was one of the first opponents of President Donald Trump's nominee, citing Republicans' 2016 blockade of former President Barack Obama's pick. Republicans refused to hold hearings or a vote on Merrick Garland.

Merkley wrote on Twitter, "This is a stolen seat that demands as robust a resistance as we can possibly mount."

On the floor, he called for Republicans to delay the vote as the FBI investigates ties between Trump's campaign and Russia.

King, who caucuses with the Democrats, made the announcement on Tuesday, the last member of the Senate to state his position. The Maine senator said he initially found Neil Gorsuch to be "sincere, personable and thoughtful" but over time found the nominee's answers to be "at best, increasingly evasive, and, at worst, simply not forthright."

King is the 44th lawmaker to say he would vote against the nominee and vote against moving ahead on the nomination. Democrats have secured the votes to block the nomination, and Republicans are expected to unilaterally change the rules to ensure confirmation of Gorsuch later this week.

King is up for re-election next year.

The Senate is preparing to do away with the rule that requires 60 votes in the 100-member body for Supreme Court nominees. But Majority Leader Mitch McConnell says it will remain in place for legislation.

That rules change, known as the "nuclear option," will then apply to future Supreme Court nominees, too. Some senators have predicted that it will later be applied to legislation.

But McConnell said there is no appetite for that and that it will not happen under his leadership.

Lawmakers voted 55-44 on Tuesday on a motion to proceed to debate. Only a simple majority was necessary.

The real fight is expected later this week when Republicans try to advance the nominee toward a final up-or-down vote.

Minority Democrats command more than enough votes to mount a filibuster. But rather than let the Democratic obstruction stand, Majority Leader Mitch McConnell and Republicans plan to enact a unilateral rules change to eliminate the filibuster for Supreme Court nominees.

It would lower the vote threshold from the current 60 to a simple majority in the 100-member Senate.

McConnell told reporters he has the votes to change the rules.

Debate on President Donald Trump's Supreme Court nominee is under way, and Republican and Democratic leaders are casting blame.

Democrats have secured the votes to block the nomination, but Senate Majority Leader Mitch McConnell is poised to change longstanding Senate rules to confirm Neil Gorsuch.

McConnell says the Democrats' blockade is unprecedented, because there's "never been a successful partisan filibuster of a Supreme Court nominee."

But Democrats point out that McConnell blocked former President Barack Obama's nominee for the court last year, saying the next president should have the say. Republicans didn't give Judge Merrick Garland a hearing or a vote.

Senate Democratic Leader Chuck Schumer said: "What the majority leader did to Merrick Garland by denying him a hearing and a vote is even worse than a filibuster."