The jurors have three options: convict Guyger of murder, convict her of the lesser charge of manslaughter or find her not guilty of any crime.

DALLAS - The fate of Amber Guyger is now in the hands of a Dallas County jury.

Prosecutors and defense attorneys gave their closing statements Monday morning after the defense rested its case.

The jury received the case around 1 p.m. Monday. They deliberated for several hours before breaking for the day just after 5 p.m. They will resume deliberating Tuesday at 8:30 a.m.

Guyger is on trial for murder after she fatally shot Botham Jean in his apartment on Sept. 6, 2018. Guyger told the jury she mistook Jean's apartment for her own and thought he was a burglar when she opened fire.

The jurors have three options: convict Guyger of murder, convict her of the lesser charge of manslaughter or find her not guilty of any crime.

In closing arguments, prosecutors said Guyger intended to kill Jean and never considered more reasonable options. Her attorneys argued she was acting in self-defense based on the facts as she believed them at the time.

Tell Her ‘You Will Be Held Responsible’

Prosecutor Jason Fine began closing statements by holding up a piece of paper with Guyger's apologies from Friday's testimony. He then crumpled it up, called it "garbage" and threw it in a trashcan. 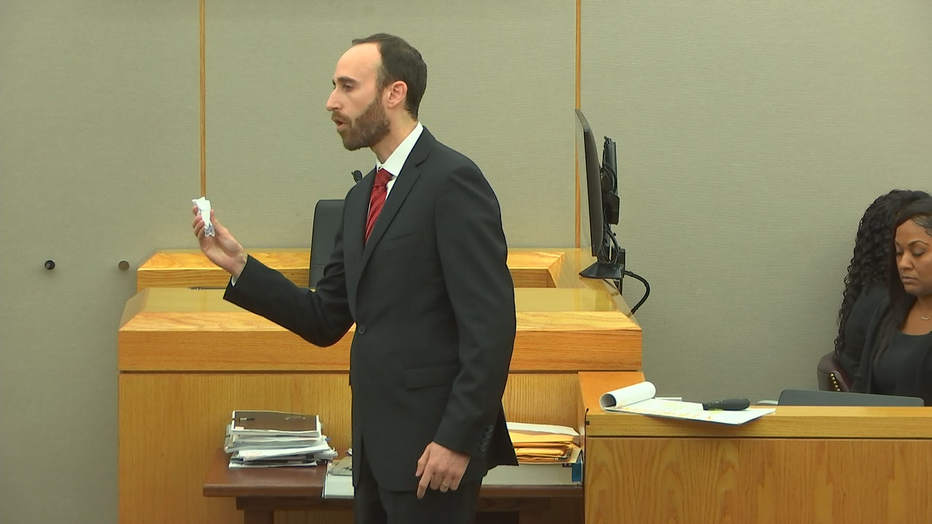 Fine said Jean was blindsided by Guyger coming into his apartment and acted like a "normal, reasonable person" when he looked over and tried to figure out why someone was inside his unit.

"Before he can even get up he is shot dead in his own home," he said.

Fine urged the jurors to not get caught up in being viewed as anti-police.

“A guilty verdict in this case does not mean you hate police,” he said. “This has nothing to do with politics. This has to do with that defendant making unreasonable decisions that put her in that seat and Bo in the ground.”

“She couldn’t even get her story straight," Fine said.

He said Jean didn't present a threat, that he was eating ice cream and that it was still frozen when police showed up.

"So if you are sitting eating ice cream, you get shot in the heart? Is that what we are saying?" Fine said.

Prosecutor Jason Hermus told the jury they “get to write the last chapter in this story." He said the jury could restore justice to the situation.

Hermus held up a picture of Jean to jurors told them there were many clues Guyger missed on her way to his fourth-floor apartment.

“And this is the one that just can’t be overcome,” he said while holding up Jean’s red floor mat. “There was no other floor mat like this in the entire building.”

Hermus told jurors justice needs to happen in the courtroom.

“By your verdict, you can also tell her ‘You will be held responsible for what you did. And whether or not you want to accept responsibility, it’s gonna be forced upon you. And by god in Dallas County, Texas, there will be a consequence for you walking in and shooting an unarmed defenseless man,’” he told jurors.

Beyond A Reasonable Doubt

Defense attorney Toby Shook spent most of his time reminding the jury that the prosecution had to prove its case "beyond a reasonable doubt" and that he believed the state had not met that threshold. 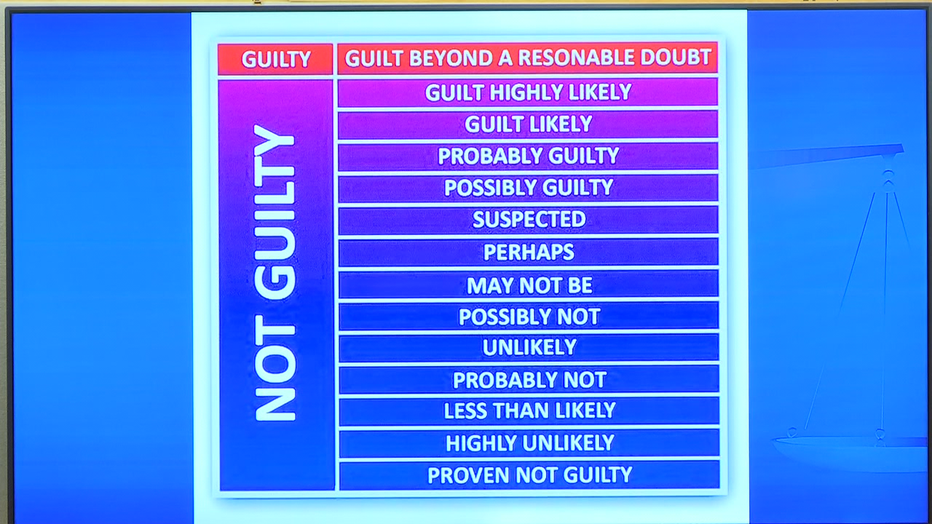 Slide shown by Amber Guyger's defense attorneys during closing arguments while discussing the burden on prosecutors.

“You’ll never see a case like this. It’s so tragic," he said, urging the jury to reach a decision rationally. “They want you to be angry and upset."

Shook said that Guyger believed she was in danger, which is why she acted the way she did.

“You have to view it from all the facts surrounding the case and under her circumstances from her viewpoint,” he said.

Shook asked jurors to remove the emotion prosecutors are trying to interject and told jurors that Guyger had a right under Texas law to self-defense.

“The state of Texas must prove to you beyond a reasonable doubt the defendant wasn’t acting in self-defense. And if they can’t do that, it’s not guilty,” he said. “Same thing on mistake of fact. If they can’t prove the defendant wasn’t operating in mistake of fact beyond a reasonable doubt, the instructions are clear: it’s a not guilty. That is the law.”

Guyger’s defense also argued she made mistakes that were not intentional. He said there were even some mistakes that others have given sworn testimony that they have also made, like parking on the wrong floor and going to the wrong apartment.

“That's 92 people who said they'd done the same thing Amber Guyger had done,” Shook said. “So when you're considering whether it's a reasonable mistake, consider that.”

“The state has failed to do their duty. We actually, even though we have no duty, we showed you how this was a reasonable mistake,” Rogers said. “The state, what did they bring you? Sexting and speculation. Everything that they have done has been to try to distract you and trick you from looking at the law in this case.”

Shook told the jury it's fine for them to not like Guyger texting her then-partner whom she was in a sexual relationship with while she was on the phone with 911. He said say they could hate her for not doing more CPR, “but you can’t convict her.”

Shook asked the jury to make their decision without worrying about how people might react to a particular verdict.

“There is tremendous public pressure in a case like this," he said.

The jury in the Amber Guyger murder trial began deliberations after receiving the case on Monday.

Guyger tearfully testified on Friday she was sorry for killing Jean last September. But during cross-examination, prosecutors cast doubt on Guyger’s grief, wondered why she didn’t call for backup instead of confronting Jean and questioned her attempts to save his life.

Guyger, who was fired after the shooting, said she wished “he was the one with the gun” and had killed her, instead. “I never wanted to take an innocent person’s life. And I’m so sorry. This is not about hate. It’s about being scared that night,” she said.

Amber Guyger gets emotional on the stand and testifies that she regrets fatally shooting Botham Jean in his own apartment.

Prosecutors have questioned how Guyger could have missed numerous signs that she was in the wrong place and suggested she was distracted by sexually explicit phone messages with her police partner. They say Jean was no threat to Guyger.

Attorney George Milner is not associated with the case.

“All the facts and circumstances are viewed from the point of view of the person on trial,” he said. “Judging from her perspective, she is in her own home. There is an intruder there at night. She is by herself.”

Dallas faith leaders are calling on people to react in peace and "be like Bo," who was a man of peace.