Prosecutors called much of Amber Guyger's testimony into question when she testified in her murder trial.

DALLAS - Former Dallas police officer Amber Guyger told the jury on Friday that she perceived Botham Jean to be a threat and chose to confront that threat with deadly force.

Guyger is charged with murder for the fatal shooting of Jean at the South Side Flats in Dallas in September of last year. She is the only living eyewitness with a first-hand account of what happened in Jean’s apartment. While on the stand on Friday, she reiterated her claim that she believed she was walking into her own unit instead of Jean’s apartment.

Guyger spent about three hours on the stand on Friday. Defense attorneys laid out her biography and had her explain why she wanted to be an officer before moving onto the day in question and why she felt like she had to shoot and kill Jean. Prosecutors then cross-examined her and questioned her decision making.

Throughout her testimony, Guyger expressed regret at what had happened. At one point, she emotionally apologized and said living with her actions has been extremely difficult.

“I feel like a terrible person. I feel like a piece of crap. I hate it, I hate it. I hate that I have to live with this every single day of my life. And I ask God for forgiveness and I hate myself every single day. I feel like I don’t deserve a chance to be with my family and friends. I wish he was the one with the gun and killed me. I never wanted to take an innocent person’s life and I am so sorry. This is not about hate. It’s about being scared that night," Guyger said.

Amber Guyger gets emotional on the stand and testifies that she regrets fatally shooting Botham Jean in his own apartment.

Guyger demonstrated for jurors she was carrying several items as she opened Jean’s door. As she was inserting the key, she said she noticed it was cracked open. Guyger said she heard movement inside the apartment. And as she put the key into the door, it pushed it opened. 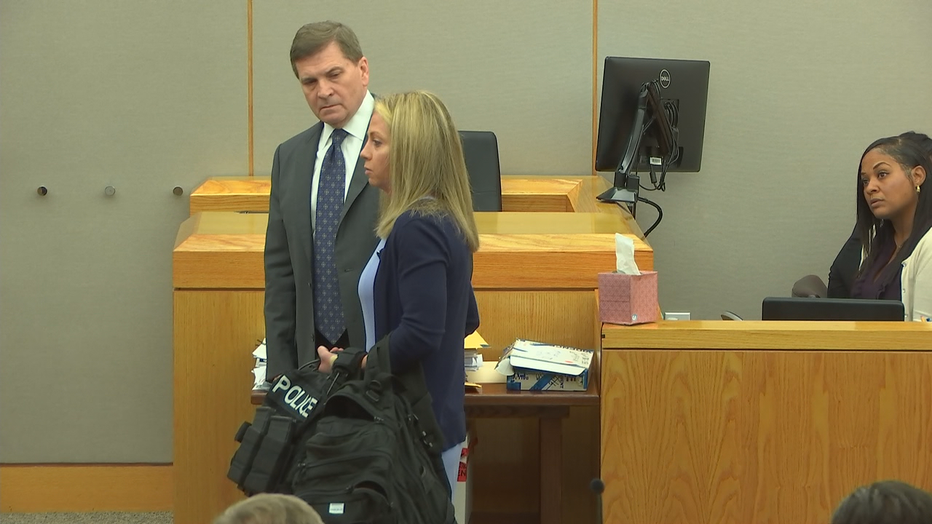 “The motions of me doing all this is less than two seconds,” she said.

Guyger said there was no light on inside the apartment. She only saw a silhouetted figure by the window.

She said Jean started moving toward her saying, “Hey, hey, hey!” in an aggressive voice.

That’s when Guyger said she shot twice and Jean fell down.

“I was scared that he was going to kill me,” she said.

Guyger said it started hitting her that she didn't know the man who was on the floor. She was confused. She said she dialed 911 and claimed she started doing chest compressions with her free hand. She said she had never done CPR before.

She said she stopped the CPR because the call taker asked her where she was.

“I had no idea where I was. I had to go outside and look,” Guyger said.

When asked what was going through her mind at the time, Guyger replied, “I shot an innocent man. He didn't deserve it.”

Guyger explained she called her partner after getting off the phone with 911 because she was alone with a man that she had just shot. She didn’t have the help of a partner and felt alone.

The first officers who arrived told Guyger to leave the apartment. She said she did and cooperated with what she was asked to do after the shooting.

After lunch, the defense called three Southside Flats residents to the stand to testify as to their experience with what's been described as the building's ‘confusing layout.’

“I would try a couple of times, keep getting frustrated until I finally realized it was not my apartment,” said former resident Marc Lipscomb.

On 10 to 12 occasions, Lipscomb says he either parked on the wrong floor or went to the wrong unit. One time, he walked into an identical unit one floor down since the door was unlocked.

Jessica Martinez is another former resident. She testified someone mistakenly walked into her apartment.

“I heard the key noise and then my door open and a man came inside,” she recalled.

Under cross-examination, Dallas County Assistant District Attorney David Hermus asked Guyger to imagine how scarier it would be to be Jean, with someone with a gun coming into his apartment.

“You are very concerned about how YOU feel,” Hermus said.

The state pointed out that she got into a squad car as paramedics were bringing Jean’s body out on a stretcher. Video appears to show her texting rather than looking at his body.

Amber Guyger takes the stand in her murder trial: ‘I’m so sorry’

Guyger admitted that was true. She said she looked down because she didn’t want to see his body. She couldn’t recall who she was texting.

Hermus asked Guyger again about texting Rivera rather than continuing CPR. He also pointed out that she did not tell the 911 call taker that Jean was coming at her or that she was in fear.

“You didn’t say one thing about any kind of threat that Mr. Jean was to you,” he said.

Guyger admitted that she relies on her training. She fired at Jean twice because she said that’s what she was trained to do.

“You knew when you were shooting that gun that you were using deadly force to stop Mr. Jean,” Hermus said. “You intended to kill him.”

“When you pulled that trigger, you intended to kill Mr. Jean,” Hermus said.

“I did,” Guyger admitted. 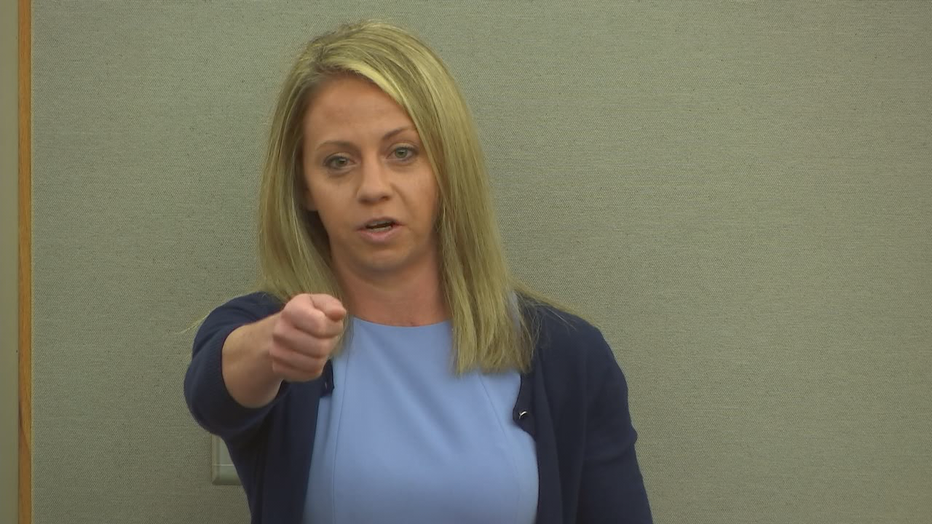 Hermus did not buy Guyger's tearful testimony saying that two days after the deadly shooting Guyger asked her married police partner, with whom she was having an affair, if he wanted to go for drinks.

Prosecutors must prove intent to kill on a murder charge, which is a higher threshold than other potential charges that could have been brought in the case.

Hermus reminded Guyger that she could have taken a position of cover and concealment. She also could have used her radio to call for help. Every officer in the area would have been there as fast as possible.

“Had you done any one of those things, Mr. Jean would probably be alive today, right?” Hermus asked.

The prosecutor questioned Guyger about why she let Rivera know she was leaving work. He suggested she was intending to meet up with him. Guyger denied having plans to see him later that night. She said she planned to go work out at a nearby gym after arriving home.

“I wasn’t completely drained. I just wanted to go work out,” Guyger said.

The prosecutor questioned Guyger about the bright red doormat outside Jean’s apartment and decorate plants in the hallway that she failed to notice. He also introduced evidence showing she took an eight-hour de-escalation course a few months before the shooting.

When questioned about the contents of her backpack, Guyger admitted it never crossed her mind to use the combat gauze inside. I can be used to stop bleeding.

Guyger's background and an affair

Guyger told jurors she's wanted to be a police officer since she was about 6 years old because she wanted to help people.

Years after graduating from the academy and joining the department’s CRT team, Guyger explained she became intimately involved with her partner, Martin Rivera. She kept it a secret because, “I was embarrassed because he was married... I knew it was morally wrong.”

At work the day of the shooting, Guyger said she was responsible for securing the perimeter around the area where SWAT would be serving a warrant for robbery suspects who were “armed and very violent.” She called it a “tense situation.”

Guyger talked about texting Rivera after getting off her shift. She said she went to grab food with some of her co-workers while Rivera left to go to a scout meeting with his kids. She said there was no real plan for him to come over that night. Guyger said he had never been to her apartment.

Guyger said she never called her partner because he was married and she knew it was wrong. Instead, he would call her leaving the gym or a store. She was on the phone with him when she returned to her apartment and drove up to what she believed was the third floor of the building. She stayed on the phone with him after backing her truck into a parking spot.

The final part of Friday afternoon’s session was spent with the defense attempting to get certain expert testimony in front of the jury, including the lead investigator, Texas Ranger Sgt. David Armstrong, who believes Guyger didn’t act wrongly.

The defense’s efforts were mostly rebuffed by the judge. Ultimately, the judge ruled that Armstrong can testify for the defense as an expert witness but in a very limited capacity.

Armstrong first testified as an investigative witness for the prosecution, but the judge did not allow his testimony then about him believing Guyger did not commit a crime to be admitted as evidence.

Armstrong can testify again, but only as to what an officer might be going through physically when encountering a high-stress scenario like a shooting.

The defense will continue to present its case in a rare Saturday court session. Saturday’s session is scheduled to begin at 9 a.m. and go until 4 p.m.

Legal analyst Russell Wilson weighs in on Amber Guyger's testimony during Day 5 of the trial.