Dallas leaders said more than 100 homeowners and businesses will soon get letters in the mail alerting them of code violations.

DALLAS - Homeowners and businesses in North Dallas are still dealing with the impacts from a tornado that touched down more than three-months ago, when an EF-3 tornado destroyed three Dallas ISD schools and forced dozens to leave their homes.

Some who are still trying to put their lives back together are worried about what this change could mean for them.

Dallas leaders said more than 100 homeowners and businesses will soon get letters in the mail alerting them of code violations.

It's an effort to keep the area safe, but many say they are left with few options because of a lack of financial help.

Even months after the tornado, parts of Marsh Lane and Walnut Hill still look like it hit the area just days ago.

There are still dozens of boarded up businesses and homes, and some don't look salvageable. 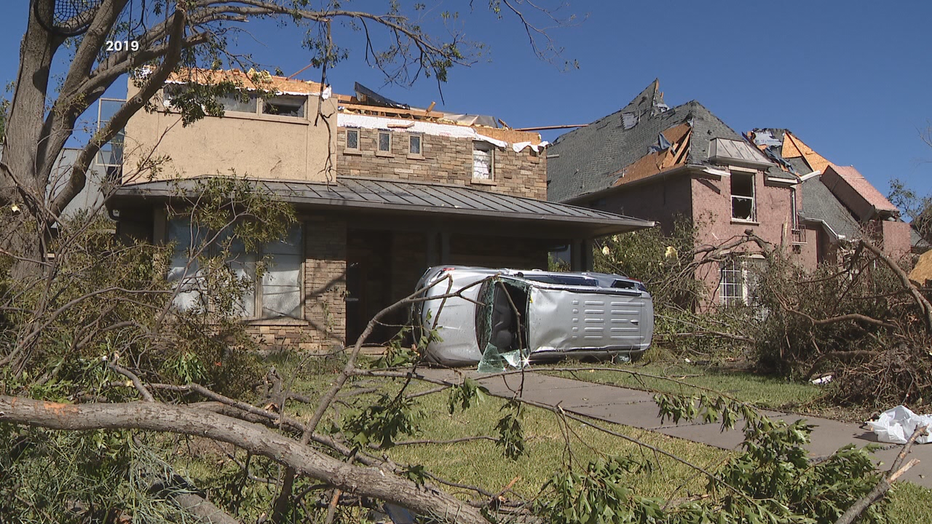 “I am hoping the city will give us a break, but they...all I know is they promised, but nothing yet,” homeowner John Porras said.

Porras has lived in his home for 30 years.

Right now, the entire front side of his house is gone, but his family is still living in the part that was untouched by the tornado.

He has boarded up parts, and tarped what he can, but the damage is still visible.

“The place is tore up, how much longer can we wait? I am just doing it a step at a time, but that’s all I can do,” he added.

A memo from the Dallas city manager to council members discussed the Department of Code Compliance starting to cite homeowners and businesses.

Code compliance will be mailing a letter to more than 100 residents alerting them of their violations.

City leaders said it's in effort to make sure abandoned businesses and homes are secure.

Using fencing, boards, and tarp to prevent it from becoming a place for the homeless.

City council members said those who receive letters need to contact the city so code enforcement can work with them to fix the issues.

FOX 4 learned this week that more than $50,000 has been donated to the city to help tornado victims.

City leaders said they are also waiting for President Donald Trump to sign a disaster declaration.

That can also free up federal and local funds to help people like Porras.

“I don't know why Trump is holding us back, what is he waiting for, to sign what,” he added. “Lived here more than 30 years, I’ve got to keep on going.”

Councilwoman Jennifer Staubach Gates said they want to be sensitive to homeowners dealing with tragic loss.

She says homeowners need to contact the city before citations are issued to discuss how to get help.