It was a rough night Friday for outdoor events like early trick-or-treating and high school football.

DALLAS - It was a rough night Friday for outdoor events like early trick-or-treating and high school football.

Lightning delayed some games and threatened to delay others.

One of the games delayed was at Highland Park, where they were taking on Richardson High School.

Heavy rain and lightning forced officials to call for the delay.

It was not the most pleasant weather for fans, but it was the lightning that caused a lot of issues at games across North Texas.

It looked as if kickoff would start roughly on time for visiting Richardson as they went to take on Highland Park.

Although cold and wet, fans were able to get into their seats, with lightning clear of the area.

"It’s wet and cold, and I’d rather be on my couch, if I didn’t have a kid out there," Highland Park parent Debbie Rote.

A handful of parents waiting for a choir performance before the game knew they couldn’t be late.

"We can’t miss the opening of the game," Hallie Lawrence said.

[REPORTER: "So what happens after the choir’s done?"]

But almost as soon as fans got settled, another lightning strike forced fans to take cover, and the weather delay was extended again, and again.

Sewall was waiting on a senior to take the field.

"It’s senior night, so we don’t want to just cancel it," Sewall said. "We’d like to actually be out here and play."

RELATED: Second round of rain to bring showers through Saturday morning 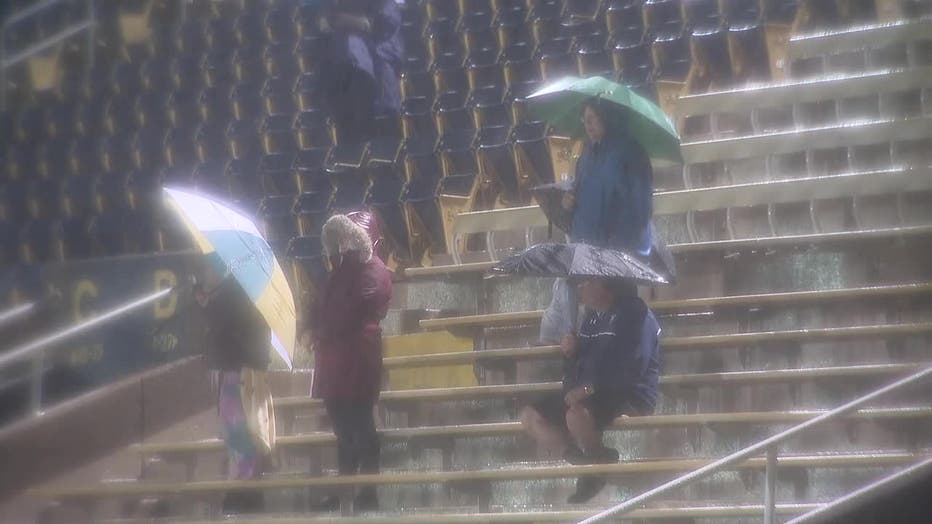 Organizers moved an outdoor trunk or treat event to inside the Hilton Anatole in Dallas due to the rain.

"We thought it was going to be cancelled, but yeah, we’re here," Alexis Avalos said. "We’re here indoors having a good time."

Meanwhile, the fourth annual Trick-or-Treat on Downtown Streets event went on as planned in Dallas.

"We actually live in the area and this is our first time, so we just decided to pop by even though it’s raining," Taja Moxey said.

Because even rain couldn't wipe out the best parts of a Halloween weekend.

[REPORTER: "What’s your favorite part about trick or treating?"]

"Getting scared," she added.

And as scary as it was that football games wouldn’t go off as planned, Richardson and Highland Park eventually got underway about an hour and a half late.

And fitting for the cold and wet conditions, it was a running touchdown that got the Highland Park Scots on the scoreboard first.