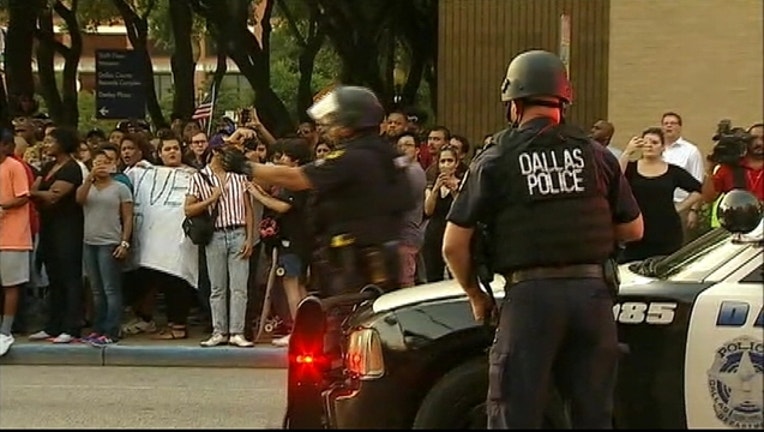 The department says they were directed by Police Chief David Brown to respond demands from the Next Generation Network.

The group told the police department they would continue to conduct protests in downtown Dallas until they responded to their list of demands for police reform.

Below are NGAN’s demands and the Dallas Police Department's response to them:

1. Abolish the 72 hour wait after an officer involved shooting

Effective immediately, every officer will be provided the same legal rights as any other citizen who is the subject of a criminal investigation.

Any changes to the Citizen's Review Board must be made through the City Council.

The Dallas Police Department and DFR are working on a new policy where they both will respond to CIT calls.

4. "Deprioritize" enforcement in consumption of alcohol on the streets, possession of marijuana, disorderly conduct, criminal trespassing, littering, disturbing the peace, and spitting

The Dallas Police Department is sworn to enforce the law to protect citizens.

The Dallas Police Department does not have, require, or suggest a quota for officers for tickets or arrests.

The Dallas Police Department continuously reviews the Use of Force Policy and will make a copy of the policy available to the Next Generation Action Network.

The Dallas Police Department is nationally recognized as a progressive community policing organization. The department continuously reviews its community policing efforts and will make a copy of the programs available to the Next Generation Action Network.

Dallas Police Department currently requires all officers to be instructed on Fair and Impartial Policing; Police Legitimacy and Procedural Justice.

9. Prohibit use of municipal/federal funds to purchase military equipment

10. City ordinance to require audio and video technology to be used by officers with a clear policy regarding its use

The Dallas Police Department has clear policies regarding the use of audio and video technology by officers. The City Council passes city ordinances.

The Dallas Police Department will release all body camera, car video, and audio in accordance with state law.

12. All officers are bonded and insured by a 3rd party insurance company so the city is not liable for "rogue officers"

The City of Dallas is self-insured.

13. The prioritization of hiring minority officers

For the first time in its history, the Dallas Police Department is a majority minority police department.

14. No one has been held accountable for not using their body cameras or dash cameras

The controversial group has organized several protests within the past months. The group organized the demonstration in downtown Dallas on July 7 that ended with the death of 5 police officers.

The group's founder and CEO, Dominique Alexander, was recently arrested for old traffic warrants and violating his probation associated with a 2009 cause of serious bodily injury to a child. He has since bonded out.