A COVID-19 testing site has been opened&nbsp;outside the American Airlines Center in Downtown Dallas.

DALLAS - A COVID-19 testing site has been opened outside the American Airlines Center in Downtown Dallas.

Some people lined up in their vehicles hours before testing began Saturday morning.

The federal government provided Dallas County and city officials with 4,800 test kits to be used at two testing sites opening up this weekend.

To qualify for a test, people do not have to live in Dallas County. However, to get a test, people have to be a healthcare worker, first responder, or DART driver, or be 65 or older. Even if they meet one of those criteria, they must have a fever of 99.6 or higher in order to be tested.

“Don’t come out here if you don’t have symptoms, because still, this one is targeted to those most vulnerable populations. The highest priority at this point, but there are other places where people can get tested,” explained Dr. Phil Huang, director of Dallas County Health and Human Services. 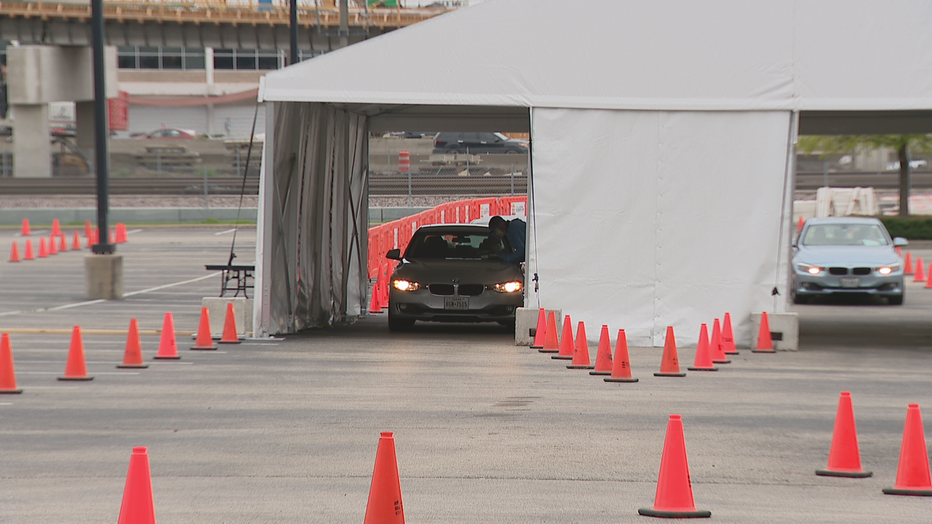 The tests will not be processed on site. Officials said FedEx will pick up the tests twice a day, and they will be sent off to a lab to know whether the tests are positive or negative. It will take several days to get the results back.

At the testing site, it’s a three-part process. Verification of the requirements at the entrance, followed by registration, and finally, testing.

“Everybody just have grace and patience,” Jenkins added.

“We’re expecting the visitation period to last between 20 and 30 minutes,” said Randall Payton, incident commander for the City of Dallas Emergency Management.

Once testing is complete, members from Parkland Hospital’s Quality Assurance team will label it with a barcode and match it with the patient care report.

It’ll then be delivered to a private laboratory by FedEx. FedEx will be picking up samples twice-a-day.

“We have been told that we’ll get new kits every week,” Director of Emergency Management Rocky Vaz said.

For eligible patients who missed Saturday’s opportunity, a second, similar large-scale drive-thru testing site event, with the same criteria, will open Sunday at the Dallas ISD’s Ellis Davis Field House, near I-20 and I-35E. It will operate from 8 a.m. to 8 p.m.

Judge Jenkins warned people to not take fever-reducing medicine before coming to these testing sites because if it lowers your fever below the 99.6-degree threshold, they’ll have to turn you away. It’s just a part of the protocol.

This is not the only place where you can be tested.

So if you don’t meet the criteria, contact your healthcare provider for other options.

It's located outside the hospital's emergency room.

The first patients will be seen on Monday.