Wednesday wasn’t about what's happening on the court that was special. It’s what was going on in many of the best seats. They were filled with retired and active troops who were being honored for their service.

DALLAS - It was a special night at the Dallas Mavericks game at the American Airlines Center.

Wednesday wasn’t about what's happening on the court that was special. It’s what was going on in many of the best seats. They were filled with retired and active troops who were being honored for their service.

For 15 years, the Dallas Mavericks have hosted Seats for Soldiers.

Each year, courtside season ticket holders give up their seats for active duty and veteran military members. This year, there were two Medal of Honor recipients in the group.

Many fans and the Mavs ManiAACs lined up at the doors of American Airlines Center to thank some of the men and women who serve our country.

“I'm ready to get courtside, meet the players and, honestly, being away from that environment of being at the hospital all the time. Day to day during treatment,” said Kayshawn Porterfield, an infantry paratrooper.

American Airlines provided a charter flight to bring service members from the Brooks Army Medical Center outside San Antonio to Dallas to be honored by the Mavs organization. 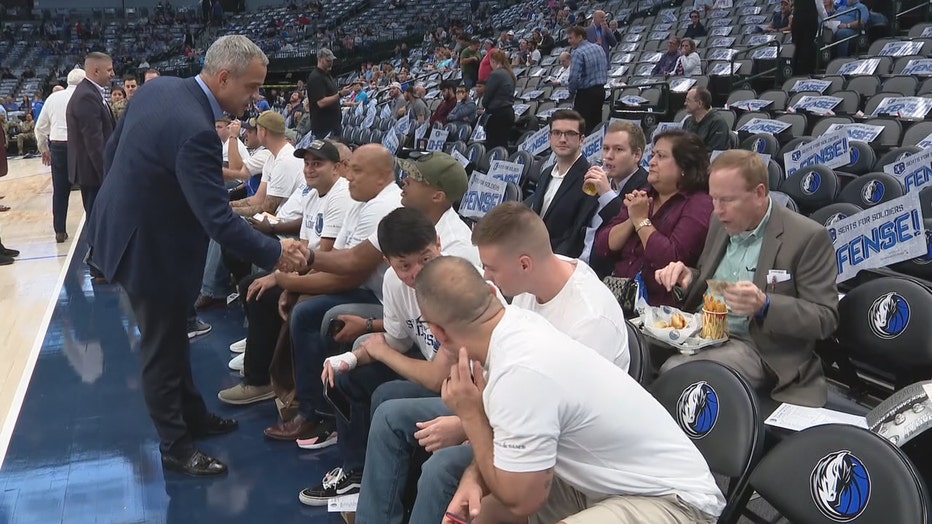 Seats for Soldiers started 15 years ago with season ticket holders Jamie Hawks and her husband giving up their tickets for one night.

“Christmas, my 7-year-old is excited,” Hawks said. “But today, it's grown men and women. I get to do 41 other games in the year. They get to do tonight. It brings a lot of joy to me.”

In the crowd of 150 military members, there were two Medal of Honor recipients: Vietnam vet Michael Thornton and Afghanistan war veteran Leroy Petry.

“Every morning when I put on my prosthetic, it's a memory that I get to open my eyes and breathe air into my lungs one more time and have a life that they do not,” Sgt. Petry said. “At night when I take it off to charge it, I know that I've been blessed with another day to make a difference in other’s lives.”

Petry was awarded the Medal of Honor in 2011. He was hit by enemy fire while serving in Afghanistan. He saw a grenade, picked it up and threw it to save fellow rangers.

Despite receiving the highest and most prestigious military honor, Petry doesn't see himself as a hero.

“I think there's a hero in every one of us,” he said. “I think it's doing something to help someone else. It could be as simple as listening to their problems, and you can be a hero so. We all have heroes.”

The service members and veterans had dinner before the game at Nick and Sam’s. Those we spoke with say it’s an experience they’ll never forget.

“Being able to do things like this, a gathering, where your disorders don't bother you as much because you are around more people like you,” Porterfield said.

American Airlines, the Mavs’ partner, provided the flight from San Antonio. The Mavs organization says they hope to provide more seats next season.