A Dallas man’s lung cancer is gone after he was the first in North Texas to undergo a new robotic procedure.

DALLAS - A Dallas man’s lung cancer is gone after he was the first in North Texas to undergo a new robotic procedure.

Doctors say it’s a game changer in the fight against this deadly disease.

But things nearly took a turn after a routine chest x-ray revealed the unthinkable.

Doctors suspected Bone, a very active grandfather of 13, had early stage lung cancer, even though he hadn’t smoked in 37 years.

“I grew up in East Texas. We smoked and drank beer when we could sneak it and that, you know, it didn't occur to me at all,” he said. “Emphysema, maybe. Okay, I gave that some thought because that's in my family history, but not cancer.”

“Lung cancer is the number one cancer killer in the United States every year, and unfortunately, the majority are diagnosed at a later stage,” said Dr. Crescens Pellecchia, who is an interventional pulmonologist at Medical City Plano.

Fortunately for Bone, new technology at Medical City Plano would allow doctors to use a robotic camera to go into the windpipe and deep into the lungs, test the tissue, and in Bone’s case, a thoracic surgeon removed the cancer. 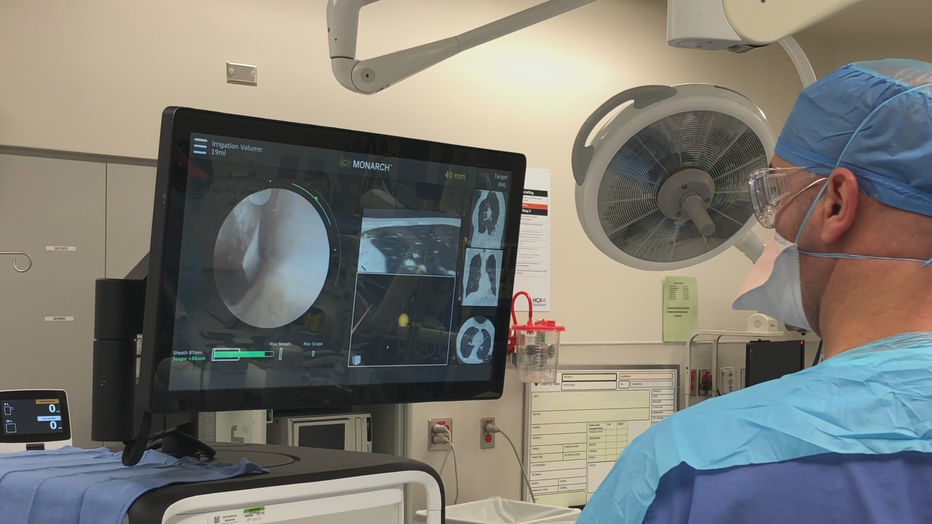 Dr. Pellecchia was the man behind the robotic camera.

“This procedure with Jere was special in that we were able to biopsy, get a diagnosis, and basically cure his cancer all in the same setting, which is virtually unheard of,” he said. “Allows us to do something never could have done before.”

[REPORTER: “Have you thought about what you might still be going through had this particular procedure not been available to you?”]

“It wouldn't have been done until later because it requires opening that side of the chest and going in and finding the spot,” Bone replied.

And often, later means much lower chances of survival, and possibly chemo or radiation.

But instead, Bone went home a day later, picking up where he left off.

“I'm blessed with a beautiful family and surrounded by the love all the time,” he said.