Thousands of Dallas ISD athletes are preparing for their upcoming season knowing they’re already behind the ball, compared to other districts that are already underway.

DALLAS - For so many North Texans, when they think of fall, they think high school football. Thousands of Dallas ISD athletes are preparing for their upcoming season knowing they’re already behind the ball, compared to other districts that are already underway.

It has not been easy, but Dallas ISD is finally gearing up for high school football.

Football might come normal to Barnett, but the pandemic is certainly shaking up any sense of normalcy for Dallas ISD’s season.

“Everything has to be intense, intense, because we’ve got to catch up fast,” Barnett said.

Dallas ISD, being one of the larger districts in the state, just began strength and conditioning last week.

Practice is revving up this week, and games are scheduled to start October 1.

“Yeah, it is definitely a challenge because, like I said, there’s so many moving parts and what happens on the north side of town might not be happening on the south side of town,” Dallas ISD Athletics Director Silvia Salinas said.

Salinas said the district’s stadiums will operate at 50% capacity, but that number includes players, cheerleaders, band, officials, police, etc., so that doesn’t mean 50% of the actual bleachers will be filled.

Teams have also been following UIL guidelines to prevent spreading the virus.

If an outbreak were to occur midseason, and certain games were canceled, the district is unsure how it would affect a team’s playoff chances.

“By the UIL deadlines and certification deadlines, I don’t think we have time to postpone or reschedule a game,” Salinas said.

But the players say what they have beats having nothing at all. 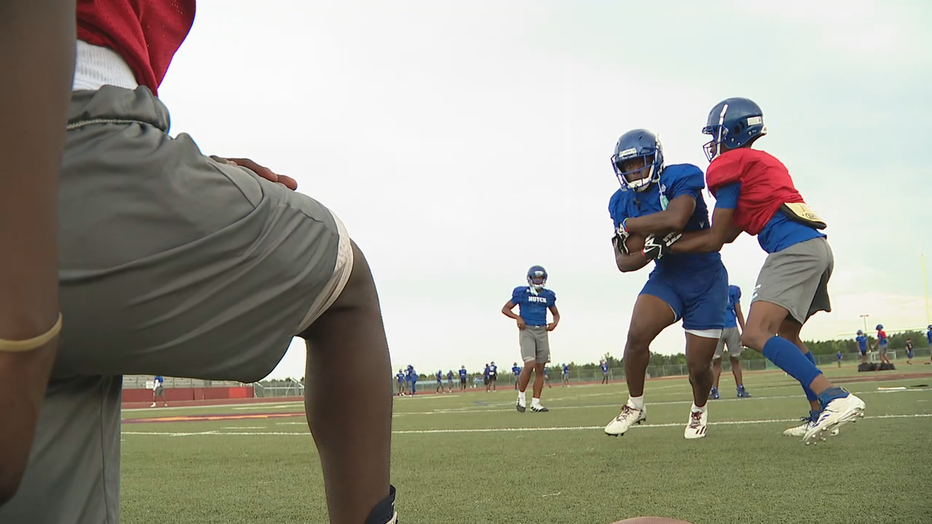 “The first thought that entered my mind was the seniors, because for all the time I’ve known these guys, they’ve been working their butts off day in and day out,” Barnett said.

And while they can’t wait for kickoff, for now, they’re thrilled to practice the game they love.