Even though the church sanctuary will have to be rebuilt from the ground up, the congregation agreed that trying to help their neighbors was still a priority.

DALLAS - Hundreds of people showed up for a community dinner hosted by a Dallas church that was severely damaged in Sunday's tornado.

Northway Church on Walnut Hill Lane was prepared to feed 2,000 people Wednesday. There were also resources for people who wanted to help other storm victims get back on their feet.

Even though the church sanctuary will have to be rebuilt from the ground up, the congregation agreed that trying to help their neighbors was still a priority.

Three days after an EF-3 tornado ripped away the roof of Northway Church on Walnut Hill Lane, its congregation focused on rebuilding the spirit of their community. 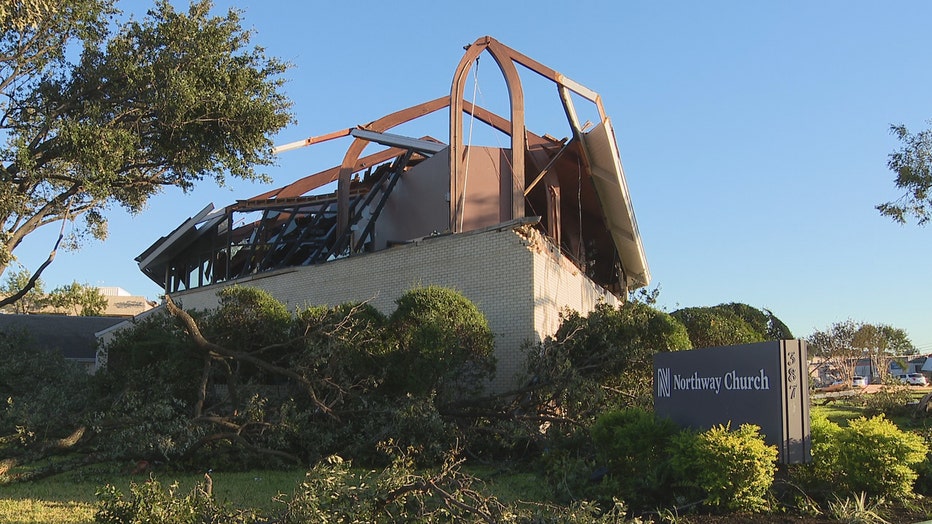 A neighborhood dinner provided a hot meal for families. Some have gone days without power.

Mike McAlister lives across the street. He’s exhausted from cleaning up debris and working to repair the hole in his roof.

“Being out of touch with no electricity and everything, it’s kind of like I’ve been in a dream and it’s just so unreal,” he said.

McAlister says he rode out the storm in his bathtub with a pillow covering his head.

“I can’t believe anybody wasn’t killed. That’s amazing,” he said.

Sunday’s tornado hit Northway Church roughly two hours after the evening service had ended. Pastor Shea Sumlin rushed back to see his destroyed church. Still, his mind was on nearby families without the means to recover quickly.

“Lord willing our insurance is going to take care of this,” he said. “And it was an instant desire to go ‘We’ve got to turn our attention outward.’”

Wednesday’s invitation to the church parking lot was open to all with enough donated barbeque, cookies and snacks to feed 2,000 people.

Neighbors, who didn’t know they were neighbors, shared stories and support.

The pastor says the sanctuary will have to be completely rebuilt and likely will not re-open until 2021.

Northway Church has raised $75,000 to go to local families affected by the storm. For the immediate future, the church will hold its Sunday service at Watermarke Church at 5 p.m.