Dallas Cowboys executive Charlotte Jones Anderson is one of the most powerful women in professional sports.

DALLAS - Dallas Cowboys executive Charlotte Jones Anderson is one of the most powerful women in professional sports.

She was honored Thursday for one of her many accomplishments as a leader of charitable foundations.

Anderson was awarded the Cooper Institute's Legacy Award for her work as chair of the NFL Foundation, which the league uses to give back to communities.

The theme of Thursday was recognizing the NFL’s work with youth and health. Leading that vision is Charlotte Jones Anderson, who was awarded for her work. She is the daughter of Cowboys owner Jerry Jones.

The Cooper Institute in Dallas has been leading the fitness conversation in the country for decades. And it's been a partner of the NFL Foundation for the last decade promoting programs like NFL Play 60, which teaches kids about health and fitness.

Charlotte Jones Anderson has been chair of the league's charitable institution since 2012. Thursday she was honored with Cooper Institute's Legacy Award. 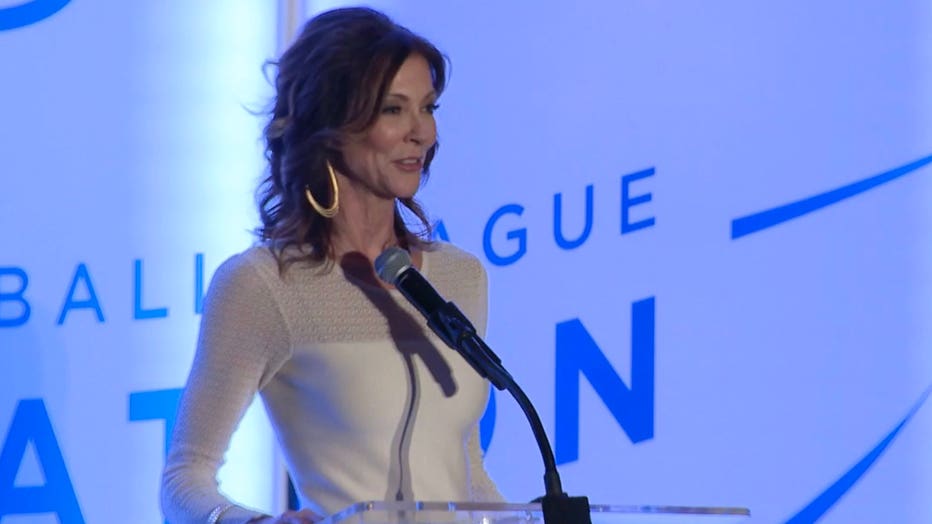 “For us being able to use personalities and players in the NFL to get the attention from kids in schools and teach the important of nutrition and fitness and good health, then we are truly using the platform for good and doing what we are supposed to doing, besides just playing the game,” she said.

Cowboys great and pro football Hall of Famer Roger Staubach is on the boards for both the Cooper Institute and the league's foundation. He's also a past recipient of the Legacy Award.

Staubach says he's pleased to see the success the NFL has had using its platform to promote healthy living. He says Anderson is a big part of that.

“Charlotte is just fantastic. She has represented the Cowboys. She’s involved in everything the Jones family is doing,” he said. “The NFL has the wherewithal to get the message out there, and they have taken advantage of it in a good way. To take the message to children and getting them healthy.”

Anderson wears many hats. She's the Dallas Cowboys executive vice president and chief brand officer and is the first woman to lead the NFL Foundation. She says philanthropy is her calling. Just last month, she and Cowboys owner Jerry Jones donated $1 million to help Dallas ISD recover from the tornado outbreak.

“If that privilege comes in incredible responsibility to do important things that benefit as many people as we can and to do so from a leadership standpoint where you can empower others to have that same passion for the community and the same passion to give back, you really know you were doing something purposeful,” she said.

Fort Worth Mayor Betsy Price was also honored at the dinner.