Who are the Supreme Court justices?

Nine justices make up the Supreme Court, with one Chief Justice and eight Associate Justices.

WASHINGTON - The Supreme Court began hearing arguments Friday on major Biden administration work rules to bump up the nation's vaccination rate against COVID-19 at a time of spiking coronavirus cases because of the omicron variant.

The justices were taking up the questions of whether to allow the administration to enforce a vaccine-or-testing requirement that applies to large employers and a separate vaccine mandate for most health care workers. The arguments were expected to last at least two hours.

Early in the arguments some members of the court's conservative majority expressed skepticism for the employer rule. Justice Neil Gorsuch and Chief Justice John Roberts suggested officials had overstepped. Roberts said it's "hard to argue" that officials had been given the power to act by Congress. Justice Amy Coney Barrett suggested that a problem with the rule was its broad scope.

But the court’s three liberal justices suggested support for the employer rule. Justice Elena Kagan said officials have shown "quite clearly that no other policy will prevent sickness and death to anywhere like the degree that this one will." And Justice Stephen Breyer said he found it "unbelievable" that it could it be in the "public interest" to put that rule on hold. He said that on Thursday there were some 750,000 new cases in the country and that hospitals are full.

Legal challenges to the policies from Republican-led states and business groups are in their early stages, but the outcome at the high court probably will determine the fate of vaccine requirements affecting more than 80 million people.

"I think effectively what is at stake is whether these mandates are going to go into effect at all," said Sean Marotta, a Washington lawyer whose clients include the American Hospital Association. The trade group is not involved in the Supreme Court cases.

Keeping the vaccine mandate for health care workers on hold "will likely result in hundreds or thousands of deaths and serious illnesses from COVID-19 that could otherwise be prevented," Prelogar wrote. 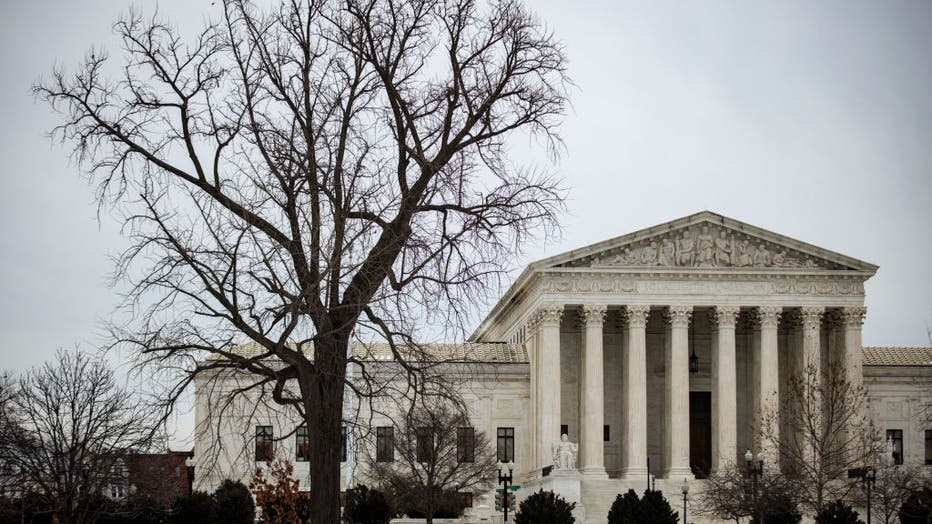 The U.S. Supreme Court building is seen from the U.S. Capitol grounds on Jan. 6, 2022, in Washington, D.C. (Photo by Samuel Corum/Getty Images)

Nearly 207 million Americans, 62.3% of the population, are fully vaccinated, and more than a third of the country has received a booster shot, including the nine justices.

The court said Friday that Justice Sonia Sotomayor would not be on the bench with her colleagues, opting instead to take part remotely from her office at the court. Sotomayor, who has had diabetes since childhood, has been the only justice who wore a mask to previous argument sessions in the courtroom. Two of the six lawyers arguing were also participating remotely by telephone following COVID testing.

Andy Slavitt, a former adviser to the Biden administration on COVID-19, said the vaccine requirements are extremely effective for 15% to 20% of Americans "who don’t like to get a shot, but they will and don’t have any strenuous objection."

The high court will be weighing in on administration vaccine policies for the first time, although the justices have turned away pleas to block state-level mandates.

But a conservative majority concerned about federal overreach did bring an end to the federal moratorium on evictions put in place because of the pandemic.

They broke with the other justices on the right over state mandates for health-care workers, but joined them to allow evictions to resume.

What vaccine mandate means for firms and workers

The Biden administration's sweeping COVID-19 mandate would apply to 84 million workers at mid-size and large companies.

Both vaccine rules will exacerbate labor shortages and be costly to businesses, opponents said. "People are going to quit. It will make a bad situation worse and they’re not going to come back," said Karen Harned, executive director of the National Federation of Independent Business’ Small Business Legal Center.

Her group is among those challenging an emergency rule adopted by the Occupational Safety and Health Administration under which workers at businesses with 100 or more employees must be vaccinated or get tested weekly and wear masks while working. The rule has exceptions for those who work alone or mostly outdoors.

The OSHA rule is supposed to take effect Monday, although the agency has said it would not impose fines on businesses that don't comply before late February.

Decisions by federal appeals courts in New Orleans and St. Louis blocked the mandate in about half the states. The administration has said it is taking steps to enforce it in the rest.

Both cases came to the court on an emergency basis and the court took the unusual step of scheduling arguments rather than just ruling on briefs submitted by the parties. Unlike in other cases the court hears, a decision from the justices could come in weeks if not days.

Because of the pandemic the justices were hearing the cases in a courtroom closed to the public. Only the justices, lawyers involved in the cases, court staff and journalists were to be present. The public could listen live, however, a change made earlier in the pandemic when the justices for nearly 19 months heard cases via telephone.

The court has been asking arguing lawyers to have negative coronavirus tests and participate remotely if they have a positive test. Ohio Solicitor General Benjamin Flowers, who was arguing against the employer rule, had tested positive for COVID-19 after Christmas, had mild symptoms and fully recovered, but a test on Sunday required by the court detected the virus, a spokeswoman said. He had been vaccinated and had a booster shot.

Louisiana Solicitor General Elizabeth Murrill who was arguing against the health care workers rule, was also arguing remotely. Her office said that was because of "the COVID protocols of the Court" but did not elaborate.

It is the first time since the court returned to in-person arguments in October that lawyers were arguing remotely.