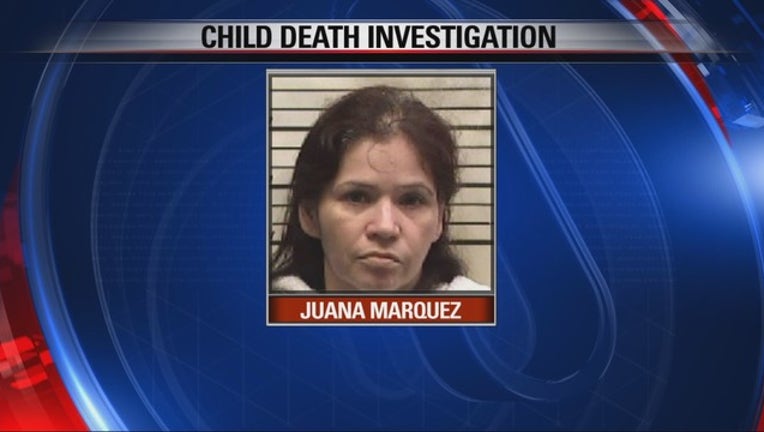 CORSICANA, Texas - A Corsicana child is dead after her stepmother claims a pot of boiling water fell on her.

Corsicana police said 42-year-old Juana Marquez called them on Saturday about an unresponsive child in her home on South 34th Street.

According to an arrest warrant affidavit, she told officers 4-year-old Amberly Quiroz had pulled a pot boiling water off stove the day before. It scalded her face, chest and arms.

Marquez said she was bathing other children at the time and heard the little girl's screams from the kitchen. She immediately put her in a cold shower and treated the wounds with Noxzema cream.

She said she did not take Amberly to the hospital because she was home alone caring for three other young children while her husband was at work in another state, the affidavit states.

While Marquez told investigators Amberly stopped crying before going to sleep, other children in the home said she "was crying and crying after the incident and that [Marquez] kept telling her to hush before sending her to her own bed."

The girl would not wake up in her bed the next morning, the other children told investigators, the affidavit states.

"There was approximately 12 hours between the boiling water falling on Amberly and police responding to her deceased in bed. [Marquez] failed to provide any assistance to Amberly including medical assistance or even attempting to call for assistance," police said in the affidavit.

Marquez now faces a felony charge for abandoning or endangering a child resulting in serious bodily injury or death.

A preliminary autopsy report from the Navarro County Medical Examiner's Office indicates Amberly died because of her injuries from the boiling water.