The first day of the Conservative Political Action Conference in Dallas showed that the Republican party remains very much the party of Donald Trump.

DALLAS, Texas - The first day of the Conservative Political Action Conference in Dallas showed that the Republican party remains very much the party of Donald Trump.

The former president will speak at the event on Sunday.

RELATED: Former President Trump to speak in Dallas this weekend

His son, Donald Trump Jr., was among the first headliners to speak at the conference.

Trump will remain a key player for Republican endorsement heading into the midterms.

2022 will be a big test for the Biden presidency to see if Democrats can hold onto the House and Senate.

At CPAC, Republicans said the race started Friday in Dallas.

The influence of former President Trump remained strong at the Hilton Anatole Hotel in Dallas Friday.

Republicans looking to score wins in 2022 will be looking to him for an endorsement.

The CPAC kicked off Friday with a speech from Texas Lt. Governor Dan Patrick.

"Together, we in Texas will come together in 2022 and we will keep this a red state," Patrick said. "We will take back Congress and put Pelosi in the unemployment line." 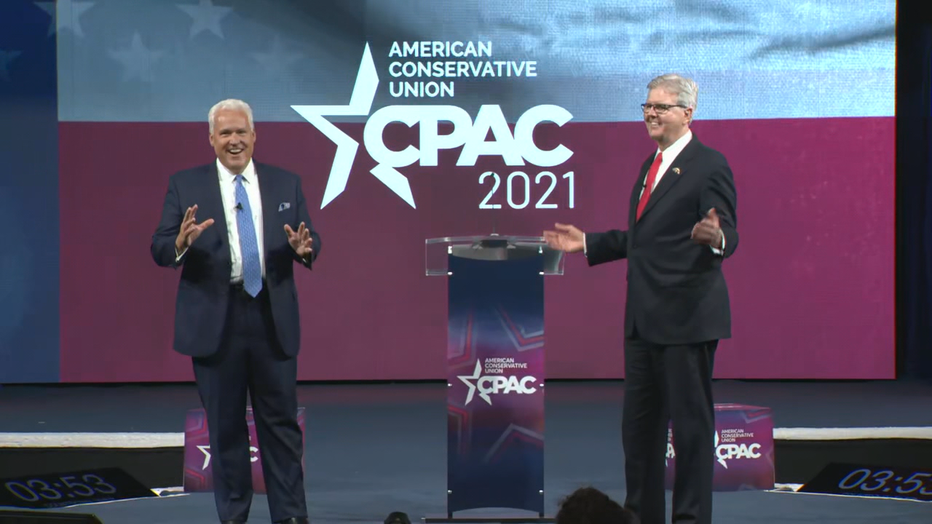 For the Republicans, they are trying to win back the House and Senate. Both chambers were lost to Democrats, albeit by small margins, within Trump’s one term.

In Texas, the governor, lt. governor, and attorney general are all running for re-election.

"The Senate is a close divide It's 50-50 now and it looks like it may not change much from that. Republicans have a little more leeway in House seats because they control more state legislatures," explained Tom Marshall, political science professor at UTA.

Multiple Texas politicians are scheduled to speak, but the headliner is the former president on Sunday.

The governor is not attending, due to the special session.

The governor already has Trump’s endorsement, and he’s got tens of millions of dollars in campaign cash banked.

Professor Marshall said this weekend is one of the few good chances for his challengers to state their case.

"This may be a consolation prize to people who have strongly supported him and have some support in the most conservative part of the Republican party. But it's not an endorsement, per say, which I think is what they would have preferred," Marshall said.

It highlights the influence Trump continues to have on the party.

His oldest son spoke at the conference Friday, and he told FOX News he plans to be very involved in the 2022 midterms.

"We will actually push back and that's what Donald Trump did for the Republican party," he said.

As for speculation the former president will run again, there’s nothing confirmed.

But the lieutenant governor said he had a conversation with Trump about it last week.

"After he left the White House, there was some speculation as to whether he would still be dominant in the Republican party. And I think the answer is still, yes, he's pretty dominant," Marshall said.