The group behind the event, "Americans for Prosperity" is a political non-profit founded by the Koch Brothers.

The gas price rollback lasted just an hour. Dozens of drivers waited in line for a chance to save some money on gas.

The event was put on by a grassroots group called Americans for Prosperity - Texas. The group says they're shining a light on inflation, highlighting what they say is the culprit: Washington's bad policies.

The line of cars stretched down Riverfront Boulevard in Dallas Monday.

Stunned drivers patiently waited until it was their turn to pull up to a pump at Fuel City, where regular gas was selling for $2.38 a gallon during the lunch hour.

"That's the cheapest I've seen gas in a while," said driver Leena Johnson. 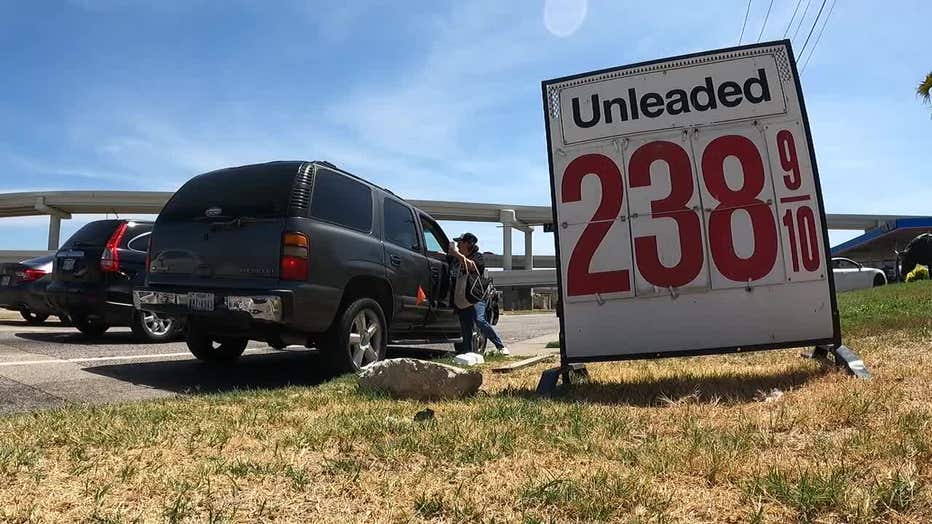 The last time was on the first day of the Biden administration, as pointed out by the sponsor of the event.

Americans for Prosperity - Texas is a political nonprofit founded by the conservative Koch brothers.

Among other agenda items, AFP is promoting more domestic energy production, which it sees as a key to curbing inflation.

"This is a real issue affecting everyday Americans, and we're here to shine a light on that. To make sure that Washington knows people are watching inflation," said AFP Spokesperson Genevieve Collins. "The true cost of inflation is hurting people's pocketbooks at the kitchen table."

"Now, being political doesn't mean that you're wrong or that your claim is illegitimate," he said. "But it means that clearly there's a there's a political purpose here."

Wilson says part of the political purpose of the event could be to try to influence frustrated voters ahead of the midterm elections.

"Voters clearly are concerned about inflation and about the erosion of their purchasing power," he said. "So inflation will be a major issue this fall."

Last week, Congress passed the so-called inflation reduction package, which Wilson says is something Democrats will be touting ahead of the November elections. But economists warn it’s not likely to do much to help struggling Americans in the short term.

"Inflation and people's discontent over rising prices will be a central point in Republican campaign appeals," Wilson said.

And events like the gas price rollback appear to be resonating with folks, no matter their political affiliation.

"I am so thankful for this because I have not had a full tank of gas since the gas spike," said driver Sheila Brewer. "This is a blessing to me."

A poll conducted by Public Opinion Strategies for AFP found that 75% of Americans reported that the increase in costs has impacted their consumer behavior over the past year.

According to economists, Americans can expect to spend an extra $5,500 to maintain the same standard of living as last year.