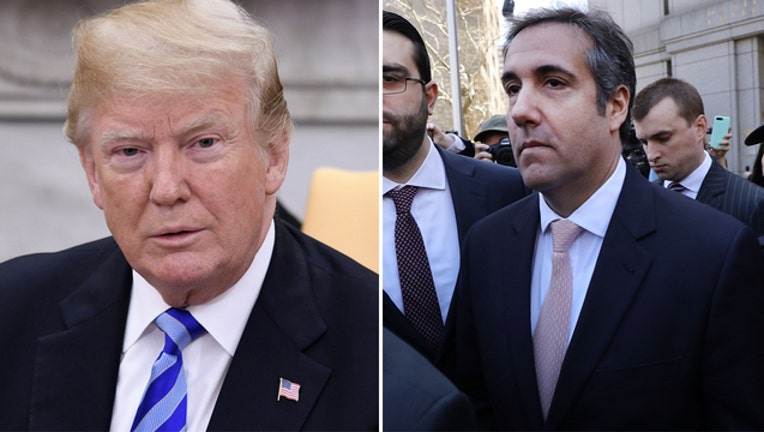 Michael Cohen tweeted that "what I did was at the direction of and for the sole benefit of" Trump.

"I truly regret my blind loyalty to a man who doesn't deserve it," he added.

Cohen was responding to an article in The Wall Street Journal that said Cohen stiffed the owner of the technology company out of tens of thousands of dollars he promised for work including using computers to enter fake votes for Trump in a 2014 CNBC poll asking people to identify top business leaders and a 2015 poll of potential presidential candidates.

The company owner, John Gauger, told the newspaper that Cohen promised him $50,000 for the work but instead gave him a blue Walmart bag stuffed with between $12,000 and $13,000 in cash, plus a boxing glove Cohen claimed had been worn by a Brazilian mixed-martial arts fighter.

Cohen disputed he paid cash, telling the Journal that "all monies paid to Mr. Gauger were by check." He offered no further comment.

Federal prosecutors referred to a payment to Gauger's company— though not by name— when Cohen was charged last summer with violating campaign-finance laws by arranging hush-money payments to two women who claim they had extramarital affairs with Trump. They said in a charging document that Cohen had sought reimbursement from the Trump Organization for those payments with a handwritten note requesting $50,000 for "tech services."

Messages seeking comment were sent to the Trump Organization Thursday.

Trump's lawyer, Rudy Giuliani, didn't immediately respond to a message from The Associated Press but told the Journal that Cohen was a thief for seeking reimbursement for more money than he'd paid Gauger's company, RedFinch Solutions LLC.

"If one thing has been established, it's that Michael Cohen is completely untrustworthy," he said.

Gauger is also the chief information officer at Liberty University in Lynchburg, Virginia. His attorney declined to comment.

RELATED: Michael Cohen to testify publicly before Congress in February

Cohen was recently sentenced to three years in prison after pleading guilty to charges that were not related to his dealings with Gauger and the technology company.