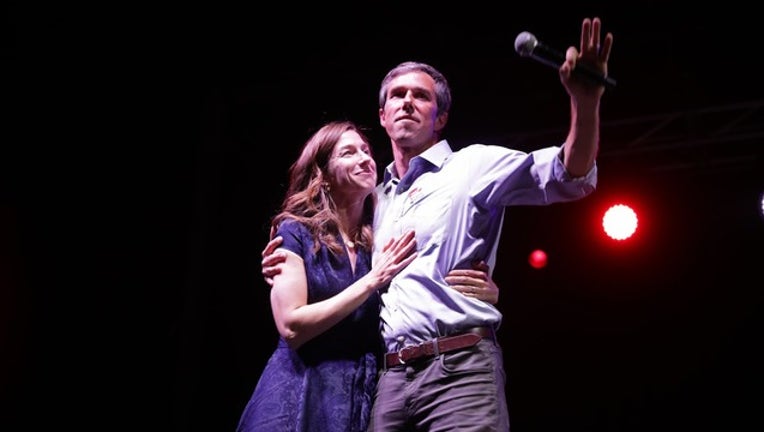 EL PASO, Texas (AP) - Beto O'Rourke didn't sound like someone giving a farewell speech after losing a Senate race in deep-red Texas by less than 3 points. If anything, the Democrat's concession to Republican Ted Cruz was a signal that voters could be hearing a lot more from him.

The El Paso congressman shattered fundraising records while becoming a national sensation as he staged an ultimately unsuccessful challenge of the Republican incumbent. His energetic campaign fueled speculation for months that O'Rourke could use an upset win, or even a close loss, to launch a 2020 presidential bid.

Such suggestions will surely intensify, no small feat considering he already has been the subject of dozens of glowing national media profiles labeling O'Rourke as "Kennedy-esque" and comparing him favorably to a young Barack Obama.

His bio includes roots as a punk rock guitarist with enough current street cred to pull off such stunts as skateboarding across a Whataburger parking lot.

"There already had been Democrats in Washington talking about him as a presidential candidate, and there is more talk about it today because what we saw last night was so impressive," Democratic strategist Brad Bannon said Wednesday. "He made it clear last night that we will be hearing from him again."

O'Rourke insists he's not interested in seeking any other political office for now and plans to return to his remote hometown of desert mountain vistas and mouthwatering tacos on the Texas-Mexico border. Asked at the start of his campaign what his post-politics life might look like, O'Rourke said he could perhaps get a certificate to teach English or "try and write something."

Still, his concession speech Tuesday night made him sound like a political star who is still rising.

He dropped a joyously defiant expletive on national television and promised to make "sure that whatever we have created ... leads to something far greater than we have today and that all of us, every single one of us, continue to believe and make possible the greatness of the United States of America."

"We will see you down the road," he told thousands gathered at a minor league baseball stadium, drawing thunderous cheers and cries of "Beto! Beto! Beto!"

Republican strategist Joe Brettell said a losing Senate race isn't typically a springboard for a presidential run, but that O'Rourke would be a natural fit for a position like Democratic National Committee chairman. Such a perch would allow him to continue to interact with his considerable donor base while building his national profile.

"The Democrats nationally have a huge problem: They are old, they are largely uninspiring or retreads," Brettell said. "And they suddenly have a fresh face who has ignited passion, but also action, at a rate we haven't seen in years."

Texas still hasn't elected a Democrat to statewide office since 1994, the nation's longest streak of futility by a political party. But, in his victory speech in Houston, even Cruz saluted O'Rourke, saying that the Democrat "worked tirelessly" and that millions across the state were "inspired by his campaign."

Despite internal polling suggesting he'd win by 7-plus points, Cruz edged O'Rourke by about a third of that - and only after President Donald Trump took the once unthinkable step of traveling to the country's largest conservative state and embracing a former bitter rival just two weeks before Election Day.

Cruz campaign manager Jeff Roe said O'Rourke's calls for gun control, universal health care and impeaching Trump were too liberal for Texas, but added, "I respect him and his team and what they did" and "honor the campaign that they ran."

The hard-fought Senate race helped prompt 8.3-plus million Texans to cast ballots - the state's highest ever midterm turnout - and O'Rourke raised more money than any Senate candidate in history. He also provided considerable coattails around the state, helping Democrats win seats in the Texas Legislature and key judicial races.

"I think he lost because of political entrenchment to be honest," said supporter Esteban Escobar, who attended O'Rourke's Tuesday night event. "I really wish the voters of Texas would have been more open to the unifying message that he had."

In the campaign's final weeks, as questions mounted about a future presidential run, O'Rourke said it was a "definite no." But Bannon said he got close enough to Cruz that his name on a future Democratic presidential ticket could potentially put Texas in play while making "a real impression on a lot of Democratic activists around the country."

Bannon said O'Rourke will soon be urged to visit Iowa and New Hampshire, which kick off early presidential voting.

"I'd be willing to bet serious money that happens," Bannon said.