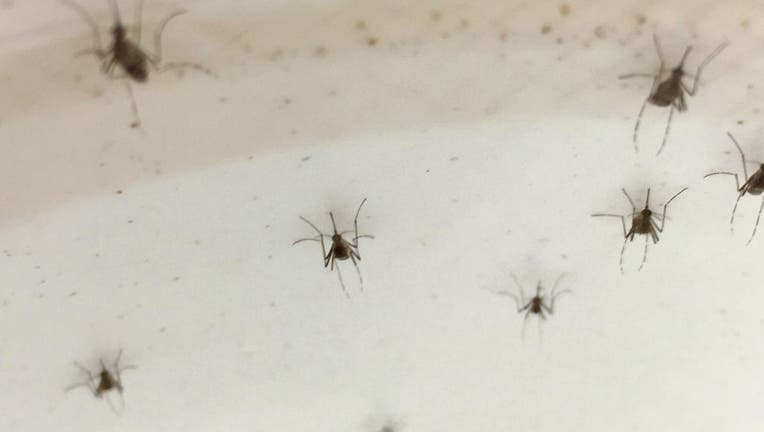 SEATTLE - A new study shows that mosquitoes are attracted to certain colors — including red, orange, black and cyan — while ignoring other colors like green, purple, blue and white.

Scientists from the University of Washington published their findings in Nature Communications. They hope their data will explain how mosquitoes find hosts, especially since human skin emits a strong red-orange "signal" to their eyes.

They also hope their findings will help design better repellants.

Researchers studied the behavior of the female yellow fever mosquitoes, also known as Aedes aegypti. They presented the insects with different types of visual and scent cues. Only female mosquitoes drink blood. Researchers also tracked individual mosquitoes in a chamber, sprayed specific odors and presented different visual patterns such as a colored dot or a tasty human hand.

The findings revealed that without an odor, mosquitoes ignored a dot at the bottom of the chamber, regardless of the color. After carbon dioxide was sprayed into the chamber, mosquitoes continued to ignore that dot if it was green, blue or purple in color. However, they would fly towards the dot if it was red, orange, black or cyan.

While humans can’t smell carbon dioxide, the gas that humans and other animals exhale with each breath, mosquitoes can.

Scientists said the hypothesis is similar to when people smell something good.

"Imagine you’re on a sidewalk and you smell pie crust and cinnamon," Jeffrey Riffell, a UW professor of biology, said in a news release. "That’s probably a sign that there’s a bakery nearby, and you might start looking around for it. Here, we started to learn what visual elements that mosquitoes are looking for after smelling their own version of a bakery."

Scientists note that they’re not sure whether mosquitoes perceive colors the way humans do. However, they believe most of the colors that are preferable to mosquitoes correspond to longer wavelengths of light. Human skin, regardless of pigmentation, also gives off a long-wavelength signal in the red-orange range, according to researchers.

Researchers say more study is needed to determine how visual and odor cues help mosquitoes target potential hosts at close range. They also believe other mosquito species may have different color preferences, based on their host species.