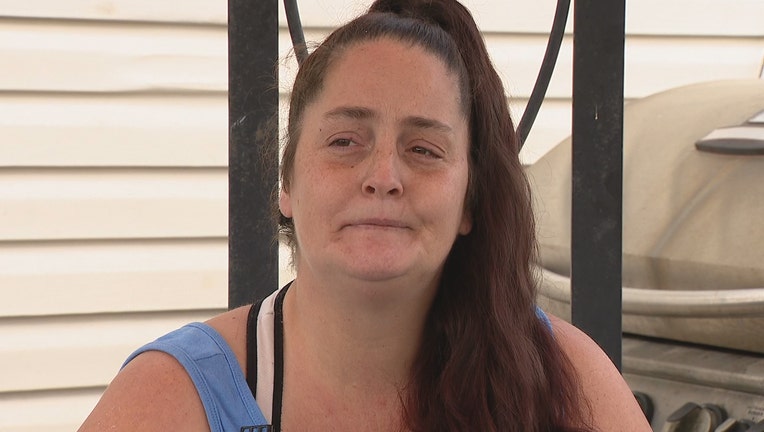 CELINA, Texas - An aspiring North Texas storm chaser is doing remarkably well after nearly being hit by lightning during a storm.

Doctors say it's a miracle Nikki Hastings survived the lightning strike that hit directly beside her as she stood near her pool in Celina. She was streaming live on Facebook Tuesday when it happened.

Friends and family watching her Facebook Live quickly called 911. Her mother, who was standing inside, rushed out to help.

The video looks terrifying, but Hastings has already been treated and released from the hospital. She and her family are thankful she walked away with her life.

Hastings has always been fascinated by storms.

“Where we live, you can watch the storms. You’ll see funnel clouds and lightning and everything,” she said. “And it’s beautiful. It’s something I’ve loved forever.”

So when Hastings saw dark clouds moving in Tuesday night, she decided to watch from her back porch and went live on Facebook. That’s when she captured the jaw-dropping moment.

“It threw me back. And it was like a bomb going off. It was so loud,” she recalled. “I was terrified because I was worried I was gonna get hit again.”

Hastings’ mom, Diane Saniewski, was in the kitchen watching.

“And I looked out the window to see her video,” the mom recalled. “And all of a sudden, you could see nothing but this deep red.”

Hastings was taken to Baylor in McKinney and was released from the hospital the same night.

“It’s a miracle because she should not be here with us, according to all professional personnel,” Saniewski said.

Though Hastings is in a lot of pain and has some bruising, she looks virtually unharmed — as does her phone.

“My knees got weak. I sat down in the chair,” Saniewski said. “I cried just a little bit because I can’t believe she’s alive.”

The terrifying experience has Hastings rethinking how she watches storms from a safe distance from now on.

“When you look at that, you should not have survived,” her mom said.

According to her doctor, Hastings has some back pain, a cervical sprain and possible head injury. She plans to return to the hospital in a few days to follow up.