Starting Tuesday, churches in the Catholic Diocese of Dallas can hold in-person mass during the week.

DALLAS - Starting Tuesday, churches in the Catholic Diocese of Dallas can hold in-person mass during the week.

The Dallas Catholic Diocese is reopening in phases. This is Phase Two, which includes one weekday in-person mass at each of its churches.

The diocese is allowing its 77 churches to offer mass once a day Monday through Friday.

The masses cannot exceed 25 percent capacity, so parishes are being encouraged to create an online sign-up sheet. Some churchgoers could be turned away if there isn’t enough room. Those who plan to attend are strongly encouraged to wear a face covering.

Families will be seated at least six feet apart in a pew, and every other row will be left empty. The building and pews will then be disinfected after each public mass or event. 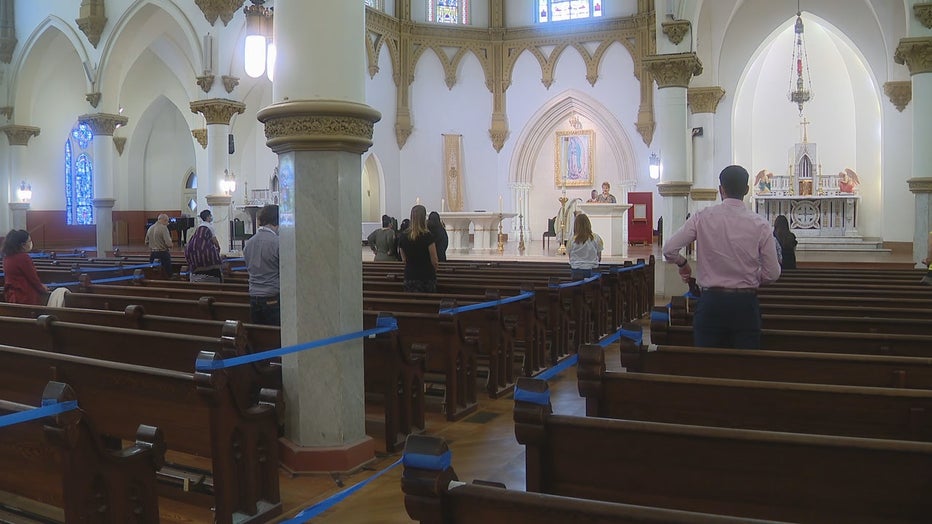 The diocese is also asking people with compromised health and those with symptoms of COVID-19 to stay home.

For now, weekend masses are suspended. They are still being streamed online and televised on FOX 4.

“Feels good. Obviously, you’ve got to do your part and social distance,” said Andrew Holovnia, who attended mass. “You can worship where ever, but it’s a place of worship. So it feels a little more special, I guess.”

Normally when downtown is bustling, noon mass at the cathedral attracts about 50 people. On Tuesday, there was half that.

“These were all the brave pioneers who wanted to see how it went and who, of course, have been longing to be here,” said Father Stephen Bierschenk.

Some of those brave pioneers started early Tuesday morning at St. Elizabeth of Hungary Catholic Church in West Oak Cliff.

Starting today, churches in the Catholic Diocese of Dallas can hold mass during the week. FOX 4's Ashley Paradez reports live from St. Elizabeth's in Oak Cliff to break down some of the guidelines.

Eve Hughey went to confession at Cathedral Guadalupe before mass, but she did not stay for service because of health conditions. She says they appreciate the diocese’s measured approach.

“I’ve always appreciated that the Catholic Church worked with the local government, and they are listening to the CDC’s recommendations,” she said. “It’s no different than a restaurant opening back up and following the same rules. So I’m confident that we are being led well.”

Father Bierschenk says it’s the church’s responsibility to protect its flock as well as the community. And for those who still don’t feel comfortable attending in person, that’s ok too.

“Our ultimate goal is not to pack the pews but to have everyone be safe and be comfortable when they come here to worship,” he said.

Father Bierschenk adds that parishioners are encouraged to take communion in their hand as opposed to on their tongue, but it is up to the individual.

Phase Three will include Sunday in-person services at limited capacity. In Phase Four, Sunday mass can be at full capacity. No timeline has been set for that just yet.