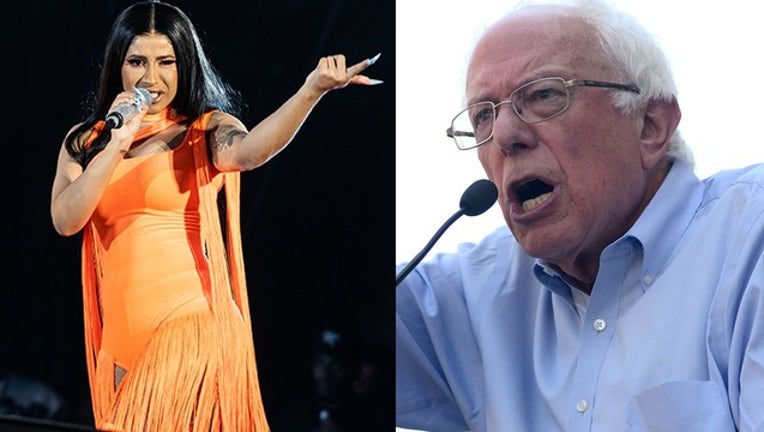 FOX NEWS - Rapper Cardi B threw her weight behind Sen. Bernie Sanders, I-Vt., as he continues his bid for the Democratic presidential nomination — something she suggested the Vermont senator deserved in 2016.

"I been reading about Bernie Sanders and I’m really sad how we let him down in 2016," she wrote on Twitter. The rapper then pointed to Sanders' longtime passion for "equal rights, HUMAN rights."

"Seeing this country become a better place been really his passion for a long time not a new front for a campaign," she continued.

Sanders thanked the rapper, who's received several Grammy nominations, for her support.

"Thank you @iamcardib! Our fight for justice is far from over and we are not giving up," he said. Cardi B has been outspoken about politics under President Trump's administration -- decrying how much she had to pay in taxes as well as blasting the president for the way he handled the government shutdown that started at the end of 2018.

“So you know the government is taking 40 percent of my taxes and Uncle Sam, I want to f--king know what you're doing with my f--king tax money!” she previously said.

On Twitter, another user suggested she was in an awkward position in supporting Sanders who would likely raise taxes as president. The 26-year-old rapper responded by saying that she didn't mind paying taxes if they went to good causes.

"I don’t mind paying taxes if I see on what am I paying my taxes on.Its sad that we pay so much taxes yet we don’t have free college education neither free healthcare," she said.

She was referring to Sanders' proposals to offer free college tuition and a single-payer health care program, two of the hallmark proposals in his platform.