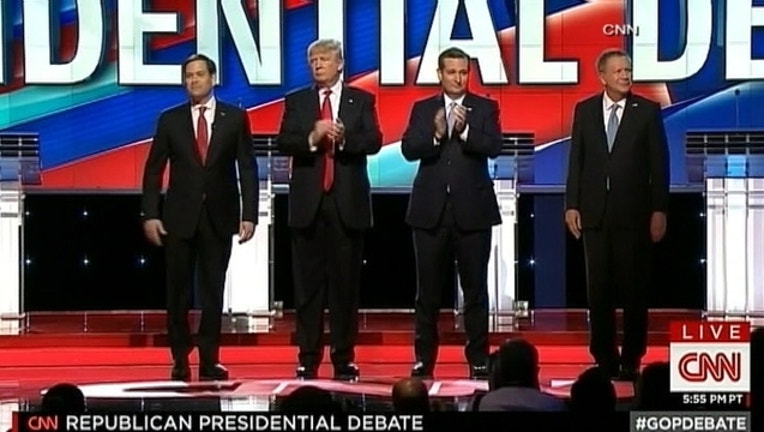 WASHINGTON (AP) — With the Republican nominating convention less than 100 days away, the GOP's presidential candidate isn't the only thing still up for grabs. Also in play: The rules by which the nominee will be chosen.

Yet there's one certainty about the party's July gathering in Cleveland: A candidate, an alliance of candidates or party leaders backed by enough delegates will be able to change the procedures any way they want.

Front-runner Donald Trump has 743 of the 1,237 delegates needed to leave the GOP convention as nominee. His closest competitor, Sen. Ted Cruz, R-Texas, is fewer than 200 delegates behind. Yet many top Republicans view both as certain losers who could cost them congressional seats.

A look at the rules governing the convention and how they could be altered to impact the nomination:

The GOP's 42 rules cover lots of terrain. They describe how delegates are divided among the 56 states and territories, who gets into the convention hall, who can be nominated, how votes are cast and how disputes are resolved.

These bylaws are temporary. This year's convention will be governed by whichever rules the delegates approve by majority vote when the four-day gathering begins July 18.

The Republican National Committee is already working on rules to present to the convention. But it's the convention delegates — initially a 112-member rules committee, two from each state and territory, then all 2,472 — who'll have final say.

Usually, each convention renews the rules with minor changes and little fanfare. They generally reflect the interests of the presumptive presidential nominee.

CLEVELAND, WE'VE GOT A PROBLEM

This year, there may not be a presumptive nominee as the convention begins.

It's possible that this will be the GOP's first competitive convention since 1976, with no candidate controlling a majority of delegates. Candidates' campaigns would compete for support for rules advantageous to them, with behind-the-scenes bargaining rampant.

Trump and Cruz could have enough delegates combined to back rules making it virtually impossible for a third rival to emerge. On the other hand, Republicans looking to block the two leaders could seek support for rules making it easier for a savior like House Speaker Paul Ryan, R-Wis., who has voiced disinterest, to gallop in and become the nominee.

"The golden rule of conventions is he who has the votes makes the rules," said GOP operative John Yob, author of a book entitled, "Chaos: The Outsider's Guide to a Contested Republican National Convention, 2016."

While most delegates must initially vote for the nominee they're elected to represent, they don't have to back that contender's preferred rules package. The candidates personally select only about a quarter of the delegates, leaving many who might secretly prefer a different contender. Campaigns are aggressively recruiting supporters to become delegates.

"Without knowing who the delegates are and who they're sympathetic to," said Josh Putnam, a University of Georgia lecturer and delegate process expert, "trying to assess what the convention is likely to do is next to impossible."

The nation's prime-time television viewers could end up watching bitter battles on the convention floor over contested delegates, rules and the party platform before they even get to nominations. Or they could view bored delegates killing time as deals are cut backstage, instead of speeches and choreographed displays of unity aimed at revving up voters. Endless roll calls, another possibility, are TV ratings killers.

"The single worst thing that can happen for Republicans is they reach Thursday and don't have a nominee," said Randy Evans, a Republican National Committee member and convention delegate from Georgia.

That might mean expired hotel reservations, delegates leaving and the convention having to halt and reconvene later. That would be a damaging, cumbersome and time-consuming process.

Currently, candidates are nominated by submitting petitions showing support by most delegates from eight states and territories.

That was changed for the 2012 convention from a lower bar: A plurality of signatures — more than any competitor — of five states' delegates. Backers of the 2012 presumptive nominee, Mitt Romney, forced that change to prevent time-consuming speeches by supporters of a vanquished contender, then Rep. Ron Paul, R-Texas.

That rule could be weakened to allow more competition.

For now, Trump and Cruz appear likely to be the only candidates capable of rounding up majority support from eight states. That's not helpful for Ohio Gov. John Kasich, who is still campaigning, or for a fresh contender like Ryan to arise.

If no one gets a first ballot majority, things could quickly sour for Trump. While various state laws and rules "bind" around 9 in 10 delegates to vote for their candidate in the first round, about 7 in 10 are allowed to support whoever they want on the second ballot, with even more freed up later.

There could be efforts to:

—Let former contenders like Sen. Marco Rubio, R-Fla., assign their delegates to a remaining candidate, a practice that now varies by state.

—Allow delegates bound to specified candidates to sign nominating petitions for others.

—Permit fresh presidential nominations if no one wins on the first ballot. Currently, voting continues until a winner emerges.