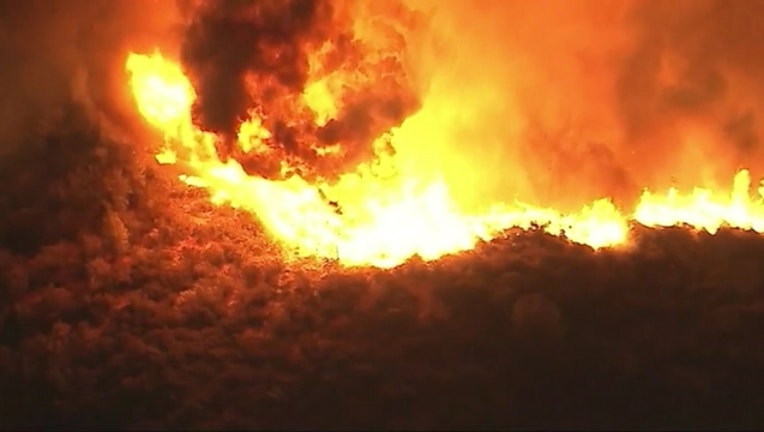 SAN BERNARDINO, Calif. (AP) — A ferocious wildfire had swallowed up many homes as it spread across more than 49 square miles of mountain and desert east of Los Angeles. Exactly how many, however, and to whom they belonged, remained uncertain.

Firefighters were faced with the difficult task of tallying that damage while still battling the huge, unruly blaze amid hot, dry and gusty weather that was expected through Thursday evening.

That left evacuees in a cruel limbo, forced to spend another night wondering whether anything they owned was still intact.

They included Shawn Brady, who had been told by a neighbor that flames had raged down their street. But he was waiting for official word.

"What I've been told is that flames are currently ripping through my house," said Brady, a dockworker who lives on the outskirts of the evacuated town of Wrightwood with his mother, sister and a dog.

"I'm trying to remain optimistic," Brady said as he sat outside a shelter for evacuees in Fontana. "It's the not knowing that's the worst."

San Bernardino County fire officials could only confirm that dozens of structures had burned, and that big numbers are likely.

"There will be a lot of families that come home to nothing," county Fire Chief Mark Hartwig said Wednesday after flying over a fire scene he described as "devastating."

"It hit hard. It hit fast. It hit with an intensity that we hadn't seen before," he said.

Firefighters had at least established a foothold of control of the blaze the day after it broke out for unknown reasons in the Cajon Pass near Interstate 15, the vital artery between Los Angeles and Las Vegas. The fire was 4 percent contained on Wednesday.

The California Highway Patrol reopened I-15 late Wednesday night, while the southbound side remained closed. Reopening the south side Thursday depended on repair of guardrails.

Those assessing damage were also looking for dead and injured, but none had been reported yet. Cadaver dogs were searching the ruins for anyone who was overrun by the flames.

Five years of drought have turned the state's wildlands into a tinder box, with eight fires currently burning from Shasta County in the far north to Camp Pendleton just north of San Diego.

Residents like Vi Delgado and her daughter April Christy were also among those wondering whether their home was intact, though they had found out that their pets and the shelter animals they take care of had been saved. They had been through earlier wildfires, but nothing like this one.

"No joke, we were literally being chased by the fire," Christy said in a voice choked with emotion in a minivan outside the Fontana evacuation center. "You've got flames on the side of you. You've got flames behind you."

More than 34,000 homes and about 82,000 people were under evacuation warnings as firefighters concentrated their efforts on saving homes in the mountain communities of Lytle Creek, Wrightwood and Phelan. They implored residents not to think twice if told to leave, but it appears many were staying.

"From reports that we were hearing, possibly up to half didn't leave," said Lyn Sieliet, a U.S. Forest Service spokeswoman.

"It does change the way that we can fight fire," she added, "Now we have to worry about the people in there as well as trying to protect the structures and trying to build a line of defense as the fire comes toward that area."

A fleet of 10 air tankers and 15 helicopters and an army of 1,500 firefighters took on the blaze, many of them coming fresh from other wildfires around the state.

Another large fire, north of San Francisco, was fading. The 6-square-mile blaze was 55 percent contained after destroying at least 268 structures, including 175 homes and eight businesses, in the working-class community of Lower Lake over the weekend.

Damin Pashilk, 40, is charged with starting the blaze along with more than a dozen other counts of arson and one of attempted arson in connection with fires dating back to July 2015. He appeared in court Wednesday, but he did not enter a plea.