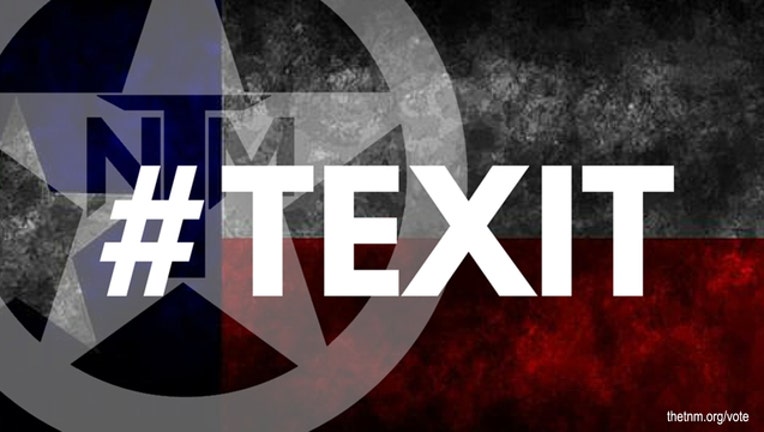 The historic “Brexit” vote has the Texas Nationalist Movement calling on Governor Greg Abbott to support a “Texit.”

“It is past time that the people of Texas had their say on our continued relationship with the Union and its sprawling Federal bureaucracy,” TNM president Daniel Miller posted on the group’s website. “The win for Brexit opens the door for Texit by establishing, concretely, that it is possible to have an adult conversation on independence and letting the people have the final say.”

“It’s a victory for ordinary people, decent people. It’s a victory against the big merchant banks, against big politics. I’m proud of everyone that had to stand up and do the right thing,” said Nigel Farage, the UK Independence Party leader.

"The British people have spoken clearly: They choose to leave the European Union," Sen. Ted Cruz said in a statement. "The results of the 'Brexit' referendum should serve as a wake-up call for internationalist bureaucrats from Brussels to Washington, D.C. that some free nations still wish to preserve their national sovereignty. The British people have indicated that they will no longer outsource their future to the EU, and prefer to chart their own path forward. The United States can learn from the referendum and attend to the issues of security, immigration and economic autonomy that drove this historic vote. In addition, we should treat the 'Brexit' as an opportunity to forge a closer partnership with our historic friend and ally, including immediately starting negotiations for a targeted US-UK free trade agreement."

The decision now launches a year-long process to re-negotiate trade, business and political links between the United Kingdom and what will become a 27 nation bloc. It’s an unprecedented divorce that could take decades to complete.

Prime Minister David Cameron, who had campaigned hard to remain in the EU, also announced his resignation Friday morning. Meanwhile, the pound dropped to its lowest level since 1985 and stock markets plummeted around the world.

The big difference between Texit and Brexit is the level of support.

During last month’s GOP convention secessionists tried to insert language supporting “independence from the United States” into the Texas Republican Party’s official platform. The proposal drew applause, but Republican Party Chairman Tom Mechler cut off the debate and it was eventually defeated.

The push had no support from top Republicans, including Lt. Gov. Dan Patrick, who said "too many people died for this country" to support secession.

Still, secession supporters are optimistic because it is the farthest they’ve taken their efforts.

“For over a decade the TNM has been on the forefront of calling out the overreach of and abuse of Texas by the Federal Government. Unlike the professional complainers in the political class we have proposed the only solution to this problem - Texas independence. It is past time that the Governor and the rest of the Legislature respond to the large number of Texans who want their say on the matter and give us a vote,” Miller wrote.