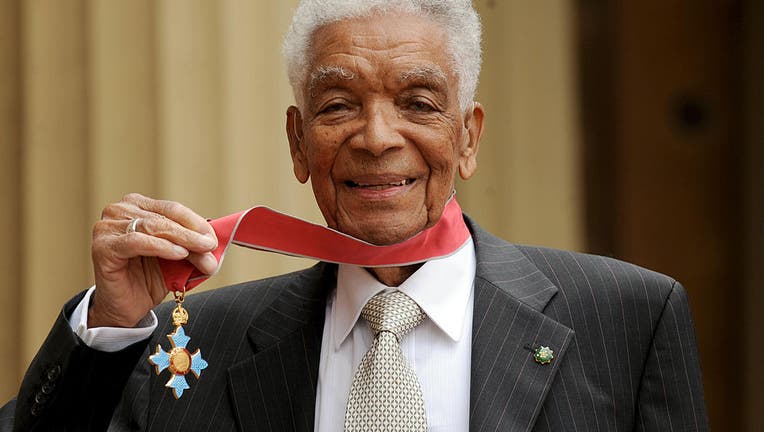 LONDON - MAY 28: Actor Earl Cameron poses outside Buckingham Palace with his CBE, presented by the Prince of Wales on May 28, 2009 in London, England. (Photo by Anthony Devlin/WPA Pool/Getty Images)

Earl Cameron, who was one of the first Black actors to perform in mainstream British films and played supporting roles to enduring entertainment icons such as James Bond and  "Doctor Who" before appearing in the U.N. thriller "The Interpreter" in his 80s, has died. He was 102.

Cameron died Friday, according to The Royal Gazette, a newspaper in his native Bermuda. The British newspaper The Guardian, quoting the actor's agent, said he died at home in Warwickshire, England.

Cameron stumbled into acting as a way to earn money during World War II and kept at it with repertory theater roles and training from the granddaughter of Ira Aldridge, an American who became a renowned Shakespearean actor in England, according to Cameron's British Film Institute biography.

His break into movies also broke barriers for British cinema. Cameron was cast in one of the starring roles in "Pool of London," a 1951 crime noir movie that was the first British film to feature an interracial relationship. His character, Johnny Lambert, is a merchant seaman who meets a white woman while on shore leave.

Cameron worked steadily making movies throughout the 1950s, sometimes in stereotyped roles such as a witch doctor and a murderous rebel leader in British Kenya, and sometimes in roles designed to confound stereotypes, such as his portrayal of a doctor in "Simba," a 1955 film that also dealt with the Mau Mau uprising in Kenya.

He earned his 007 stripes in the fourth James Bond film, "Thunderball," in 1965, playing an intelligence operative in the Bahamas opposite Sean Connery. During the 1950s and 1960s, he supplemented his film work with frequent British TV roles, including two episodes of "Doctor Who" in 1966.

"So that was my problem. I got mostly small parts, and that was extremely frustrating -- not just for me but for other Black actors. We had a very hard time getting worthwhile roles."

In 1972, Cameron got to work alongside another Bahama-born actor who broke barriers for Black film actors. Sidney Poitier cast Cameron to play the ambassador of an African country in "A Warm December," in which Poitier starred and directed.

Born in Bermuda in 1917 as the youngest of six children, Cameron arrived in England in 1939 after joining the British merchant marine. After Britain entered World War II that same year, "it was almost impossible for a Black person to get any kind of job," and he didn't have any qualifications, Cameron would recall.

"Coming from Bermuda in 1939, which was a very racist island, the degree of racism in England didn't surprise me. I had grown up with it," he told The Royal Gazette in a 2018 interview.

Cameron appeared in a number of major Hollywood and British films late in his life, including "The Interpreter" with Nicole Kidman and Sean Penn (2005); "The Queen" with Hellen Mirren (2006) and "Inception" (2010).

Queen Elizabeth II named him a Commander of the Most Excellent Order of the British Empire in 2009 for his contributions to British entertainment.

"At a time when the whole world is examining the history of people of color, Earl Cameron's life and legacy makes us pause and remember how he broke barriers and refused to be confined to what his humble beginnings may have dictated as his path," David Burt, the premier of Bermuda, told The Royal Gazette late Friday.

Cameron is survived by his wife, Barbara, and his children.