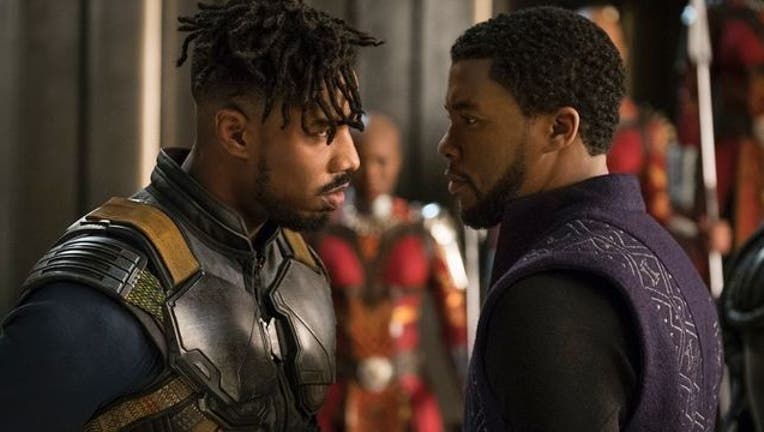 This image released by Disney shows Michael B. Jordan, left, and Chadwick Boseman in a scene from Marvel Studios' "Black Panther." (Matt Kennedy/Marvel Studios-Disney via AP)

The Marvel film from the Walt Disney Co. blew past expectations to become the fifth-highest-grossing debut ever, not adjusting for inflation, following only "Star Wars: The Force Awakens," "Star Wars: The Last Jedi," "Jurassic World" and "The Avengers."

In estimates Sunday, Disney predicted a four-day holiday weekend of $218 million domestically and a global debut of $361 million.

Though the film's international footprint doesn't include several of the largest markets -- China, Russia and Japan -- it still ranks among the top 15 global debuts ever. It's also the highest-grossing February opening weekend.

"All hail the King of Wakanda!" Disney declared, referring to the movie's mythical and highly advanced African nation.

Ryan Coogler's film, which cost about $200 million to make, is the most expensive movie with a largely black ensemble and among the few to be centered on a black superhero. The strong opening suggests "Black Panther" will easily set a box-office record for films directed by a black filmmaker.

The previous best is Sidney Poitier's 1980 comedy "Stir Crazy," which took in $322 million domestically, when inflation is calculated.

"Black Panther" set pre-sale records and saw lines around theaters over the weekend, including some who came costumed for the event.

"This is the very definition of a blockbuster: People lining up around the block to see a great movie," said Paul Dergarabedian, senior media analyst for comScore. "A movie like `Black Panther' is a cultural event that nothing on the small screen can really match in that way."

Chadwick Boseman stars as T'Challa/Black Panther in the first stand-alone film for the superhero created by Stan Lee and Jack Kirby in 1966. The cast also features Michael B. Jordan, Lupita Nyong'o, Daniel Kaluuya and Letitia Wright.

The movie has been hugely acclaimed, with a 97 percent fresh rating from Rotten Tomatoes. Audiences agreed, giving it an A-plus CinemaScore. The film especially resonated among African-Americans, who made up 37 percent of moviegoers, according to comScore.

"Inclusion and representation matters," Hollis said. "We know that great stories can come from anywhere, and our goal is to make films that reflect the wonderful diversity of our world and resonate with audiences everywhere -- no matter who they are, no matter where they come from."

Coming at one of the slower periods of the year, "Black Panther" benefited from little competition, and it can be expected to dominate the marketplace for weeks.

But moviegoers -- and Hollywood -- were focused on "Black Panther," including how it would fare overseas. Though considered by most to be an outdated myth, some have claimed that foreign audiences have less appetite for films with largely black casts.

"Black Panther" vanquished those notions with $169 million in ticket sales. It was No. 1 in most international markets, though "Fifty Shades Freed" bested it in Germany.

Its release in China will come later. This weekend, the Chinese New Year holiday, local productions led by "Detective Chinatown 2" and "Monster Hunt 2" dominated Chinese theaters, with more than $140 million in ticket sales each.

"There was a groundswell of wanting this movie to work, and then when it actually did as a film, itself, it just kicked it up a notch to a level no one could have ever predicted," said Greg Foster, Imax Entertainment's chief executive. "That makes me feel really good about the movie business."