Rain may help firefighters on the front lines in Hood County where a wildfire has burned more than 11,000 acres and is only 20% contained.

GRANBURY, Texas - Thanks to Monday’s rain, evacuation orders have been lifted in Erath and Hood County.

The rain has definitely been a help. It’s still too soon to tell how many homes, businesses or structures were damaged or destroyed by the fires.

Monday's rain showers were welcomed by firefighters battling a series of wildfires across western parts of North Texas.

The "Big L" fire in Hood and Erath counties prompted an evacuation order for the town of Lipan and Tolar on Sunday. Those orders have since been lifted. 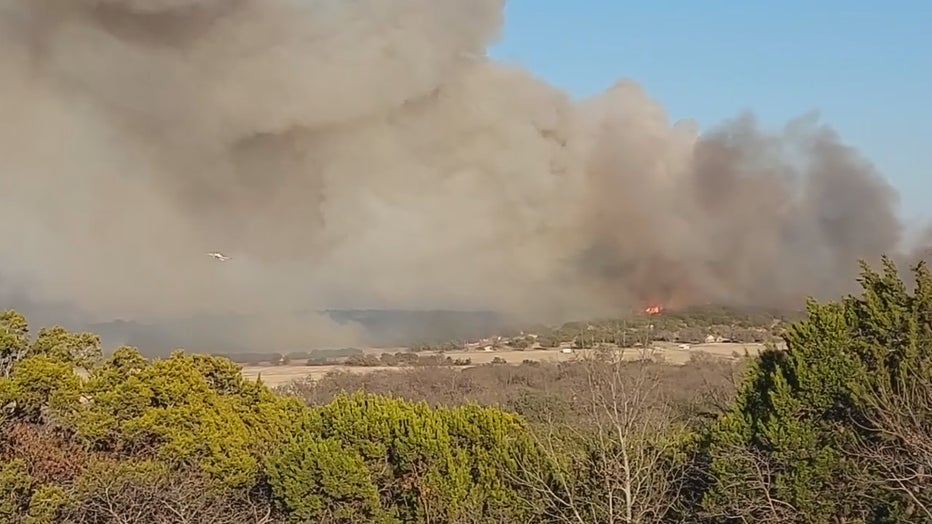 That fire has burned more than 11,000 acres and is only 50% contained. But the Texas A&M Forest Service said firefighters have stopped its forward progress.

The Forest Service returned to the area with five engines Monday morning. It’s also using dozers to dig up dirt to cover brush that could fuel the fire.

Emergency officials said they’re seeing damaged homes and buildings in the area. They appreciate the outpouring of support and help they’ve received.

"We need to do donations in stages. Right now, it’s the first responders. Shortly after this we’re going to be asking for assistance with recovery like shovels, gloves and such items. Then we’re going to go into the individual recovery where that’s where they may need furniture or items such as the bigger items," said Cindy Smith, the Erath County Emergency Management coordinator.

She said gift cards to local stores is the best way to help residents right now.

The YMCA in Granbury is one of several emergency shelters that opened in the area for evacuees. The shelter is still open for people to get a meal, rest, gather their thoughts and determine which steps to take next.

"We had quite a few families come through. They stayed for a while and were able to move to a hotel from this facility," said Carolanne Dunaway with the YMCA. "The option to have access to showers, hygiene items, cots, bedding also food, dinner, snacks, water."

At least one firefighter suffered burns while fighting the Big L wildfire Sunday. Others were treated for dehydration but are expected to be okay.

Rain today may help firefighters on the wildfire lines. The Big L fire in Hood and Erath counties has already burned more than 11,000 acres and is only 20 percent contained.

People were also told to evacuate parts of Erath and Montague counties. Those living northeast of Bluff Dale along Country Road 148 in Erath County were ordered to leave immediately.

FOX 4’s cameras captured video of the flames at Bluffdale Vineyards off CR 148. The building is intact, but the vines were burned.

On Sunday, six planes dropped retardant that helped get control of a 600 acre fire there. The forest service returned with five engines Monday morning.

"We did receive word from TDEM that overnight a FEMA grant was approved to help with the cost of the fire response," said State Rep. Shelby Slawson.

Further west, firefighters are working to get control of several wildfires in Eastland County. A total of seven fires make up the Eastland Complex, including three that ignited Sunday.

The fires have burned more than 54,000 acres combined and, at last check, the Texas A&M Forest Service said they were about 30% contained.

The agency said it is watching for potential new fires west of Interstate 35, which is critically dry and exposed to "elevated fire weather."