"I sincerely hope this holiday season will drain the poison that has infected our politics and set us against one another," the president said in his Christmas address to the nation.

WASHINGTON - President Joe Biden encouraged Americans to spread kindness this holiday season and embrace this Christmas as a "fresh start," free from the divisive politics and pandemic problems the nation has endured.

"I sincerely hope this holiday season will drain the poison that has infected our politics and set us against one another," the president said in a Christmas address Thursday. "As Americans, there's so much more that unites us than divides us."

Biden urged Americans to be kind, and to recognize that the holidays can be a difficult time for many people. This year marks 50 years since Biden's first wife and young daughter were killed in a car crash while out Christmas shopping. He referenced the anniversary in his speech.

"No one can ever know what someone else is going through, what's really going on in their life, what they're struggling with," Biden said. "That's why sometimes the smallest act of kindness can mean so much - simple smile, a hug, an unexpected phone call, a quiet cup of coffee - simple acts of kindness that can lift a spirit, provide company, comfort and perhaps maybe even save a life.

"So this Christmas, let's spread a little kindness," he continued.

The president addressed the nation as Congress works to pass a $1.7 trillion bill to finance federal agencies through September and provide roughly $45 billion in military and economic assistance to Ukraine. The Senate passed the bill Thursday afternoon, and the House is expected to take it up Friday.

FOX News senior congressional correspondent Chad Pergram said the omnibus bill won't be ready for President Biden to sign before midnight Friday, when a partial government shutdown would start. FOX reports that the Senate is working on a backup resolution to fund the government through Dec. 30. 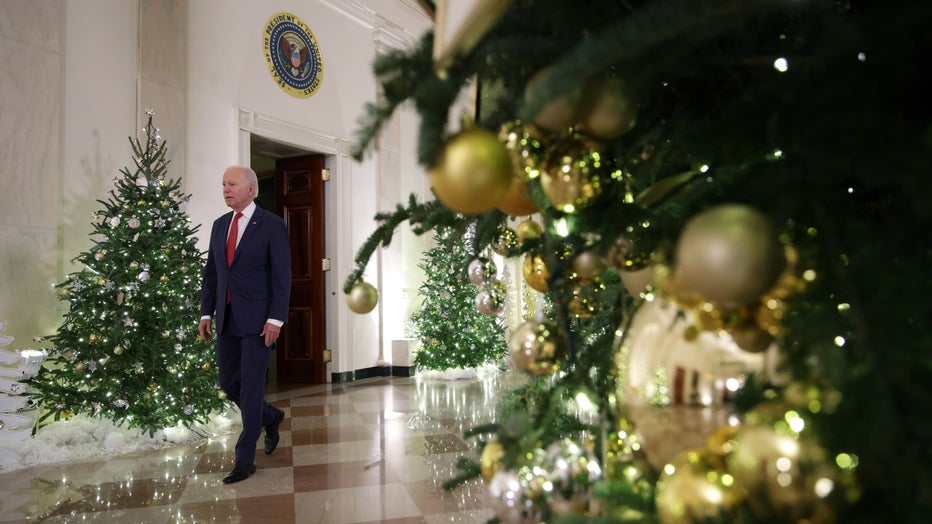 Biden’s address comes a day after he hosted Ukraine President Volodymyr Zelenskyy in the Oval Office for strategy consultations, saying the U.S. and Ukraine would maintain their "united defense" as Russia wages a "brutal assault on Ukraine’s right to exist as a nation." Biden pledged to help bring about a "just peace."

Zelenskyy's trip to the U.S. was 'historic,' professor says

President Zelenskyy of Ukraine visited Washington D.C. on Wednesday for his first-known international trip since Russia invaded. Henry Hale, a professor of political science and international affairs at The George Washington University, spoke with LiveNOW from FOX's Josh Breslow about the significance of the visit.

His speech also comes as much of the nation readies for a "once-in-a-generation" storm that’s expected to bring an onslaught of heavy snow, ice, flooding and powerful winds from Thursday to Christmas Eve in a broad swath of the country, from the Plains and Midwest to the East Coast. A surge of Arctic air will follow.

The Christmas weekend could be the coldest in decades. The National Weather Service said the storm is so large and encompassing that around 190 million people are currently under some type of winter weather advisory.