The 61-year-old talk show host and comedian opened up about the situation after facing a flurry of tweets for sitting next to the Republican president and Laura Bush at the game.

LOS ANGELES - Ellen DeGeneres defended her friendship with former President George W. Bush after taking heat on Twitter for sitting next to him and laughing together at a Dallas Cowboys-Green Bay Packers game over the weekend.

DeGeneres said she and her wife, Portia de Rossi, were invited to the game at AT&T Stadium in Texas by Charlotte Jones, the daughter of Cowboys owner Jerry Jones.

“We wanted to keep up with the Joneses,” she joked during a taping of Tuesday’s episode of “The Ellen DeGeneres Show.” 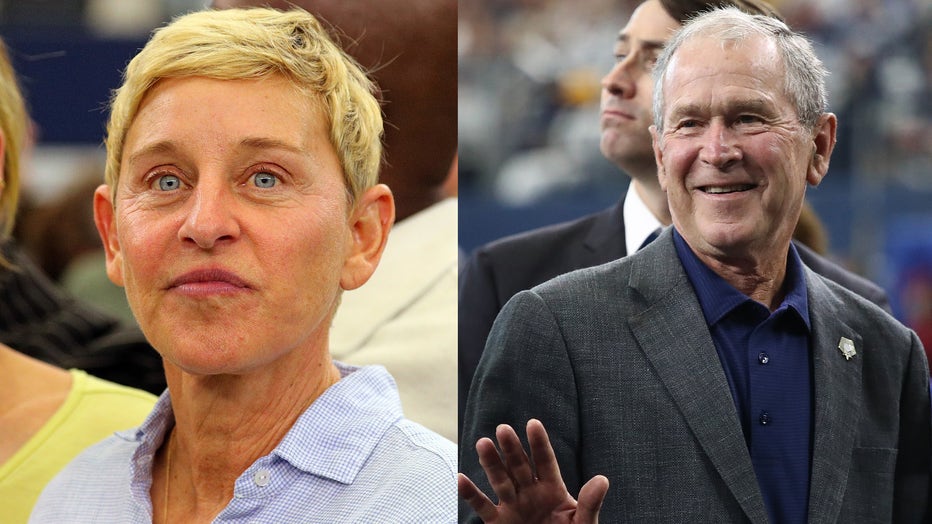 Ellen DeGeneres is pictured at the Packers-Cowboys game at AT&T Stadium on October 06, 2019 in Arlington, Texas, alongside a picture of Former President George W. Bush also at the NFL game. (Photos: Richard Rodriguez & Ronald Martinez/Getty I

The 61-year-old talk show host and comedian opened up about the situation after facing a flurry of tweets for sitting next to the Republican president and his wife, Laura Bush, at the game.

“When we were invited I was aware that I was going be surrounded with people from very different views and beliefs, and I’m not talking about politics. I was rooting for the Packers,” DeGeneres said, joking that she had to hide her cheese hat in Portia’s purse.

"During the game, they showed a shot of me and George laughing together. And so, people were upset," DeGeneres said. "They thought, 'Why is this gay Hollywood liberal sitting next to a conservative Republican president?'"

DeGeneres pointed out that “a lot of people were mad” and took to Twitter to air their opinions. In a nearly 4-minute monologue, she explained that it’s okay to have friendships with people you don’t agree with on everything.

DeGeneres used the example of how she doesn't like that people wear fur — but is still friends with many who do.

“Just because I don’t agree with someone on everything doesn’t mean that I’m not going to be friends with them,” she said. “When I say be kind to one another, I don’t mean only the people that think the same way that you do. I mean be kind to everyone.”

DeGeneres ended her message by reminding Bush: "You owe me $6 for the nachos."