Mattel debuts Barbie as a judge

The doll is available in a variety of skin tones and hairstyles and comes in a customary black robe with lacy collar.

EL SEGUNDO, Calif. - Order, order in the court. Mattel has unveiled its new Barbie Judge, the 2019 Barbie Career of the Year doll.

"The verdict is in! With over 200 careers since 1959, this year Barbie takes the stand as a Judge," the company wrote on Twitter. "The Barbie Judge Doll encourages girls to learn more about making decisions to change the world for the better."

The doll, which is available in a variety of skin tones and hairstyles, comes in a customary black robe with lacy collar that can be removed to reveal a floral dress.

“Each doll comes with a gavel and round block that kids can use to help Judge Barbie doll call the room to order and make important decisions,” a description reads.

The doll is available on Barbie.com, as well as Walmart, Target and Amazon, for $12.99.

The company decided to introduce the doll after learning that only 33 percent of sitting U.S. state judges are female, Lisa McKnight, senior vice president and global general manager for Barbie, told USA Today.

Mattel said that despite a record number of women now in office, there is still work to be done to make sure they are equally represented in all branches of government. 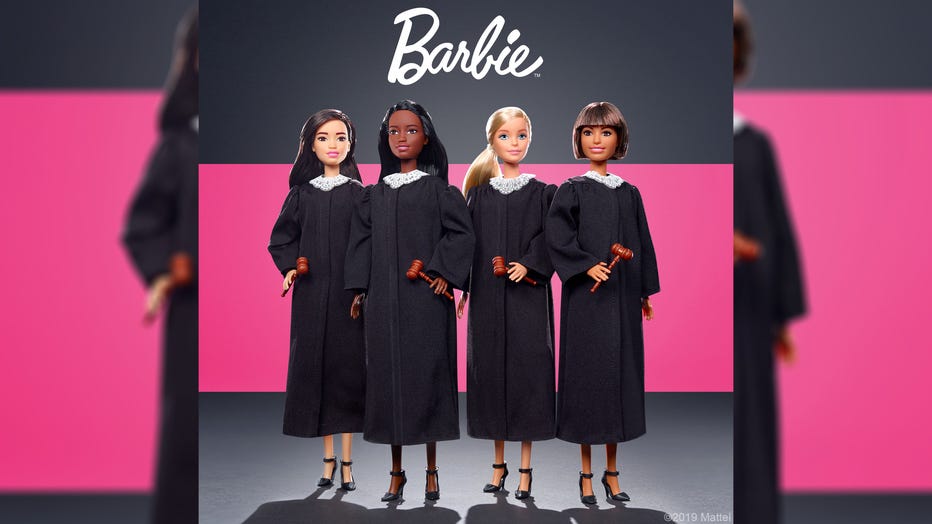 The Barbie Judge Doll comes dressed in a black robe with a gavel and round block that kids can use to help her “call the room to order and make important decisions,” the company said. (Photo credit: Mattel)

“In 2019, Barbie is taking the stand as a judge to inspire girls to explore judicial careers with the hopes that one day they will sit on the bench and make important decisions that can change the world for the better,” the company said in a press release.

The company said research has shown that starting at the age of five, many girls are less likely than boys to view their own gender as smart and begin to lose confidence in their own competence — coined “the Dream Gap.”

In addition to the release of the Barbie Judge Doll, Barbie is also continuing its effort to close that gap with its Barbie Dream Gap Project. The company partnered with the fundraising platform GoFundMe to encourage others to donate to a fund that supports nonprofit organizations “dedicated to leveling the playing field for girls.”

Mattel also recently debuted a line of gender-neutral dolls allowing kids to customize them with long or short hair, wearing a skirt, pants or both.

“Toys are a reflection of culture and as the world continues to celebrate the positive impact of inclusivity, we felt it was time to create a doll line free of labels,” said Kim Culmone, senior vice president of Mattel Fashion Doll Design. “Through research, we heard that kids don’t want their toys dictated by gender norms."