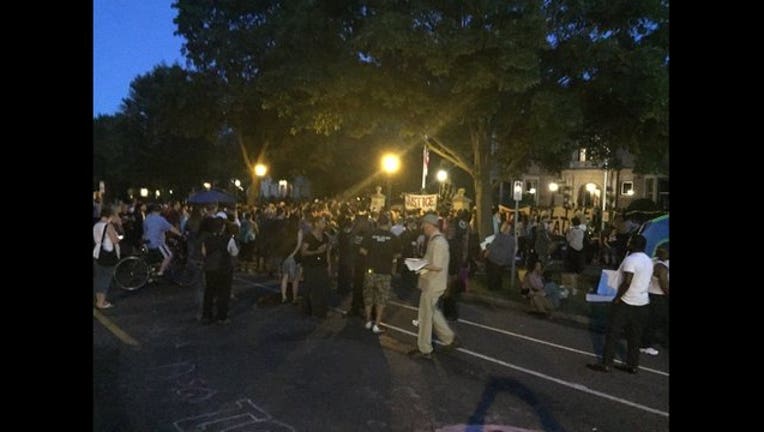 Community members remain outside the Governor’s Residence on Summit Avenue in St. Paul on July 8, 2016 to protest the shooting of Philando Castile in Falcon Heights, Minn. Photo by Rob Olson / Fox 9.

(KMSP) - The Bahamas has issued a travel advisory to residents of the island nation planning any travel to the United States in the wake of deadly police shootings of black men. “In particular, young males are asked to exercise extreme caution in affected cities in their interactions with the police,” the advisory from the Ministry of Foreign Affairs states. The advisory also urges citizens to avoid involvement in protests.

The Ministry of Foreign Affairs and Immigration has taken a note of the recent tensions in some American cities over shootings of young black males by police officers.

At the commencement of the Independence holiday weekend, many Bahamians will no doubt use the opportunity to travel, in particular to destinations in the United States.

We wish to advise all Bahamians traveling to the US but especially to the affected cities to exercise appropriate caution generally. In particular young males are asked to exercise extreme caution in affected cities in their interactions with the police. Do not be confrontational and cooperate.

If there is any issue please allow consular offices for The Bahamas to deal with the issues. Do not get involved in political or other demonstrations under any circumstances and avoid crowds.

The Bahamas has consular offices in New York, Washington, Miami and Atlanta and honorary consuls in Los Angeles, Denver, Chicago and Houston.

Pay attention to the public notices and news announcements in the city that you are visiting.

Be safe, enjoy the holiday weekend and be sensible.

The advisory follows the shootings of Alton Sterling by police in Baton Rouge, Louisiana and Philando Castile in Falcon Heights, Minnesota. In Dallas, Texas, 5 police officers were killed and 7 others wounded when a sniper opened fire at the end of a protest on Thursday, July 8. Two civilians were also injured in the shootings. The attacks made Thursday the deadliest day for U.S. law officers since the Sept. 11, 2001, terrorist attacks.