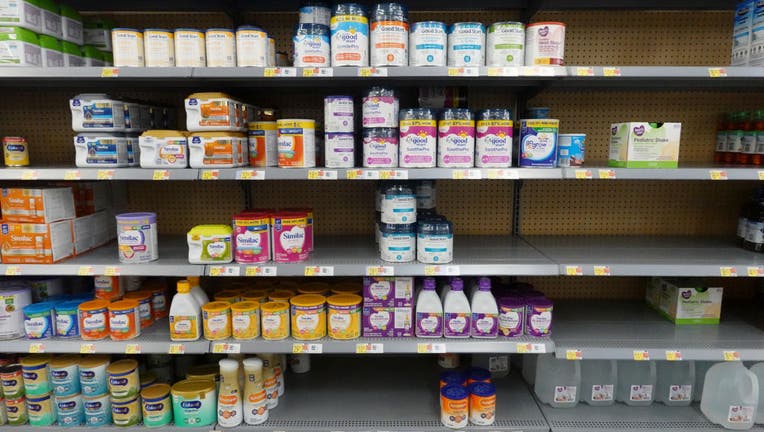 FILE IMAGE - Baby formula is offered for sale at a big box store on Jan. 13, 2022, in Chicago, Illinois. (Photo by Scott Olson/Getty Images)

Nearly 30% of popular baby formula brands may be sold out at retailers across the U.S. following a notable recall, as well as supply chain issues, according to estimates from a research firm.

An analysis by Datasembly, a Virginia-based research firm, assessed the supplies of consumer packaged goods at more than 11,000 stores nationwide. The research firm found that the issue of out-of-stock formula has been getting worse throughout 2022.

The first seven months of 2021 were found to be "relatively stable" when it came to baby formula and fluctuated between 2% and 8% of products being out of stock, according to Datasembly, which shares product pricing and data for retailers.

"In July 2021, the (out-of-stock percentage) moved into the double digits and then started to increase significantly towards the end of November where it went from 11% nationwide to 23% by the week starting Jan 16, 2022," the firm said.

By the end of January 2022, the out-of-stock baby formula index continue to climb and had reached 29% by March 13, it added.

Some states appeared to have worse baby formula shortages, according to the firm. By Jan. 16, 11 U.S. states had out-of-stock percentages higher than 30% — and the figure had jumped to 24 states by the week of March 13.

Some 54% percent of popular baby formula brands were found to be out of stock in Minnesota that week. Connecticut, Hawaii, Iowa, Louisiana, Maryland, North Dakota, South Dakota, Rhode Island and Texas were all 40% or higher, Datasembly said.

While every baby is different, most infant-fed newborns will feed eight to 12 times in 24 hours, according to the U.S. Centers for Disease Control and Prevention. Babies consume various amounts of formula through about 12 months old, which is when doctors recommend gradually switching to plain whole cow’s milk or fortified unsweetened soy beverage.

The shortages come after multiple popular powdered infant formulas linked to bacterial contamination were recalled in the U.S. The U.S. Food and Drug Administration issued a warning in February about the formulas manufactured at an Abbott plant in Michigan, identified as certain lots of Similac, Alimentum and EleCare.

The agency said among the reports of illnesses involved salmonella and Cronobacter sakazakiim — a rare but dangerous germ that can cause blood infections and other serious complications.

Following this recall and other ongoing issues, Datasembly CEO Ben Reich said infant formula was among one of the most impacted products the firm assessed.

"Inflation, supply chain shortages, and product recalls have brought an unprecedented amount of volatility to the category, and we expect to continue to see baby formula as one of the most affected categories in the market," Reich told USA Today.

Americans continued to spend even while facing sticker shock in grocery aisles, car lots and restaurants as global supply chains slow the flow of goods.

Baby formula products have been hard to find for months with big chains like Walmart and CVS Health blaming supply issues with manufacturers in the past, according to the Wall Street Journal.

Elyssa Schmier, the vice president of government relations for the advocacy group MomsRising and mother of a 7-month-old, said during a recent Instagram live that she had gone to three different stores and the formula she used "was nowhere to be found."

"Like many of you, I am completely stressed out and freaked out about the baby formula shortage that’s been happening around the country," Schmier said.

Brian Dittmeier, the senior director of public policy for the National WIC Association, a nonprofit education arm of the Special Supplemental Nutrition Program for Women, Infants and Children (WIC), also joined Schmier’s live video and noted the February recall as the big catalyst of the issue.

"There aren’t a million different infant formula plants in this country, and so when it comes to how does that affect the overall supply chain?" Dittmeier said. "The fact that a single plant was offline was quite significant to the supply across the country, and frankly, also the world."

Dittmeier the shortages are a "preventive measure" to ensure that all infant formula on the market is safe for consumption.

He added how all manufacturers are "tuned into (shortages) and it is our understanding that across the board folks are ramping up production."

"Now, it's not like flipping a switch... It's a bit of a process," he continued. "We will probably continue to see shortages in the next couple of weeks. But our hope is that as production ramps up, that later this spring it should be easier for families across the country."